Clearly the best thing is just to paint from nature.1
(Robert Zünd in a letter to the painter Rudolf Koller dated 2 May 1852, Paris)

From the 1850s onwards, Robert Zünd intensified his study of the ambience of natural light, tirelessly seeking new methods of representing it in his painting. His fascination for light was nurtured by visits to Paris in the years 1852, 1859 and 1861, where he came into contact with the painters of the Barbizon school and was introduced to the techniques of plein-air painting.2 On his return to Switzerland he put his new-found knowledge into practice, producing a series of plein-air sketches. He was a virtuoso in capturing the effects of light and a master in conveying the special atmosphere of place and time. He was committed to the precise observation and realistic depiction of natural detail but this did not preclude conscious artistic input with the intention of working towards an idealized landscape.

The low horizon and dense, towering cloud formations depicted in this oil sketch recall the cloud studies of John Constable. Set against an expanse of sky, the slender profile of a church tower rises above a village nestling in densely wooded hills. Zünd uses bold, schematic brushstrokes of paint but nevertheless achieves an astonishingly nuanced and palpable rendering of the ambience of light. His confident handling of the cloud masses shows remarkable virtuosity. The illusionistic impact of the sketch is best appreciated when it is viewed from a certain distance. The date 20. Aug 1862, incised directly into the 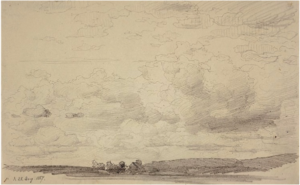 wet paint, indicates that the work was completed in the course of a single day. The precise topographical location remains unclear, however it is likely that Zünd chose a viewpoint in the countryside near Lucerne. He held a lifelong attachment to the area and rarely left it after 1853. A cloud study in pencil (Fig. 1) executed five years earlier - also in late August - shows compositional similarities, suggesting it may have been drawn from the same location.

Zünd made studies, sketches and drawings primarily for private purposes. They were known to and admired by a small group of privileged friends and he received many generous offers, but he never exhibited them or offered them for sale. This was private work – to be used in the preparation of his finished paintings.

The special importance of oil sketches in Zünd’s oeuvre was very quickly recognized after his death in 1909. A Swiss journalist writing in 1912 noted: The landscape studies which Zünd produced before the motif in the years between 1850 and 1870 rank among his most immediate and most interesting works; in particular it is the oil studies, preserved in all their freshness and which, even in Zünd’s day, [were] carefully taken care of – little known, nevertheless highly valued by those artists and connoisseurs who had the good fortune to see them. Naturalistic precision, sureness of line, and a modern sensibility for light in colour make these studies the most valuable documents of Zünd’s artistic persona.4

Zünd studied painting and drawing in the studio of Jakob Schwegler. He moved to Geneva in 1848, where he worked under two of Switzerland’s leading landscapists, François Diday (1802-77) and Alexandre Calame (1810-64). In 1851 he studied briefly at the Munich Academy where he met Rudolf Koller (1828-1905), a Munich animal painter. A close friendship quickly developed. Zünd first visited Paris in 1852, where he drew inspiration from his discovery of seventeenth-century painting. He was in Paris briefly on a number of further occasions and also visited Dresden and Munich. He married in 1853 and settled permanently near Lucerne. For the rest of his life he rarely left the area. The landscapes of the surrounding countryside were to provide him with a significant repertoire of motifs in the coming years. He ranks alongside Diday, Calame, Giovanni Giacometti and Hodler as one of Switzerland’s most distinguished landscapists.