Robert Zünd studied painting and drawing in the studio of Jakob Schwegler. He moved to Geneva in 1848, where he worked under two of Switzerland’s leading landscapists, François Diday (1802-77) and Alexandre Calame (1810-64). Zünd first visited Paris in 1852, where he drew inspiration from his discovery of seventeenth-century painting. He returned to Paris on a number of occasions and also visited Dresden and Munich. He settled near Lucerne in 1863. In the course of his career he returned repeatedly to the depiction of forest scenes. The large-format works of his late years – characterized by the dramatic effects of light penetrating the depths of the forest – represent a high point in realistic landscape painting in the second half of the nineteenth century.

This oil study is an early work. It reveals Zünd’s growing interest in the deployment of powerfully contrasting effects of light – an interest stimulated by his deep familiarity with the paintings of Calame, his teacher. Zünd also shared Calame’s predilection for trees – the motif of an uprooted tree preoccupied both painters (Fig. 1),[i] particularly with respect to the qualities of metaphor associated with the motif. Zünd’s early works are marked by meticulous attention to natural detail and by minute observation of natural phenomena. In the 1860s, he was to focus increasingly on achieving a convincing melding of detailed naturalistic depiction with the broader landscape setting.[ii] 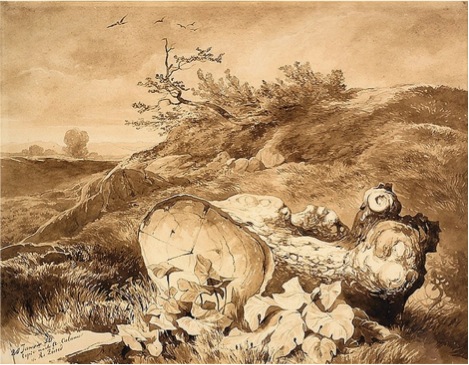 This oil study depicts a close-up view of an uprooted tree. Documentation of the subject is painstaking and arouses speculation as to the why and wherefore of its uprooting, and to its original position. This is all left open. If it were freshly fallen it might still be in leaf, however the bark appears to be intact, implying that the uprooting was a fairly recent event. Depicted at the extreme left of the image is a long, fresh split in the trunk which suggests this may have been the case. The split in the trunk is still a vivid yellowish-red and has not yet turned to brown through exposure to the elements, a process which usually rapidly occurs. Glimpsed just behind the uprooted trunk is a thick canopy of densely foliated growth emerging from a conjoined tree. The agile brushwork and precisely orchestrated naturalistic palette lend the work the compelling vivacity of a plein-air study. But the work also manages to convey a certain sense of the cycle of growth and decay in nature.

The roots of the tree and its leafless branches are very precisely articulated. Here, Zünd’s closely focused observation of nature can be compared with the naturalistic achievement of Waldmüller in his landscapes.[i] Zünd heightens the outlines of the branches and the trunk with vivid veins of thicker, reddish-brown paint deftly applied with old-masterly precision. This precise, linear style provides a striking contrast to his very ‘modern sensibility for light in colour’[ii] and underlines his remarkable skills as a landscapist. A good example of his colouristic perception is his use of vivid yellowish-red to define the fresh split in the tree trunk.

The majority of Zünd’s masterly, large-format landscapes were based on drawings and oil sketches from nature, and this is the case with the present study. His oil sketches display an astonishing freedom and fluidity of execution but at the same time they underline his commitment to the precise observation of natural detail. And they are also products of conscious artistic intention. The study convincingly demonstrates Zünd’s skill in the deployment of light and use of closely-cropped segments of reality to create perspectival effect, a practice he was to refine in his later work.[iii]

[ii] Literarische Chronik des Berner Bundes, 4 August 1912: The landscape studies which Zünd produced before the motif in the years between 1850 and 1870 rank among his most immediate and most interesting works; in particular it is the oil studies, preserved in all their freshness and which, even in Zünd’s day, [were] carefully taken care of – little known, nevertheless highly valued by those artists and connoisseurs who had the good fortune to see them. Naturalistic precision, sureness of line, and a modern sensibility for light in colour make these studies the most valuable documents of Zünd’s artistic persona.