Robert Zünd’s œuvre occupies a unique position in nineteenth-century landscape painting. He was a painter who – as his contemporary the writer Gottfried Keller observed – depicted precisely those things that the unpractised eye fails to detect or imagine.[1] He was able to unite a wealth of natural detail, minutely observed and precisely documented over a long period of time, to create an ‘ideal forest’ also referring to its intrinsic characteristics. Zünd directly addresses the contemporary viewer, whose aesthetic sensitivities were shaped as much by the rationalism of the Enlightenment as by Romanticism. The forest is both a place of refuge and at the same time, a place of threat. Keller coined the expression ‘ideal real landscape or the real ideal landscape’ to characterize Zünd’s handling of the Oak Forest motif.[2]

In the course of his career as a painter Zünd returned repeatedly to the theme of the oak forest. It occupies a major role in his œuvre and the many versions he produced are some of his most important works. A key example is the large-format painting of 1882 now in the collection of the Kunsthaus Zürich. A smaller version dating from 1859 is held at the Kunstmuseum Luzern. Oils from this body of work rarely appear on the market.

An ancient oak, its broad trunk leaning to the right and partly overgrown with ivy, dominates the foreground of the present painting. The diminutive figure of a girl is depicted standing in the dense undergrowth to the left of the image. Seen in juxtaposition to the oak, her tiny figure provides a sense of scale which is clearly intended as a device to heighten the emotive impact. The painting is a good example of Zünd’s predilection for contrasting effects of light – a dark foreground is set against gleaming sunlight breaking through rich foliage. The tonal gradation from areas of shadow to areas of light creates a perspectival effect and is offset by glimpses of delicate blue in the evening sky.

Zünd was a master of complex perspectival construction. The tacking edges of the present painting are inscribed with notes, directional arrows and indications of dimensions. This was evidently his usual practice – similar annotations can be found on many of his other works. On the edge of the image beside some of the annotations are tiny, overpainted nail holes. Regrettably, scientific analysis of Zünd’s work is long overdue. It would undoubtedly help to throw light on his working methods.[3] These may well have required the calculation of perspectival structures. It is also likely that the annotations served transfer purposes where a motif was to be reproduced in different scales and formats.[4] 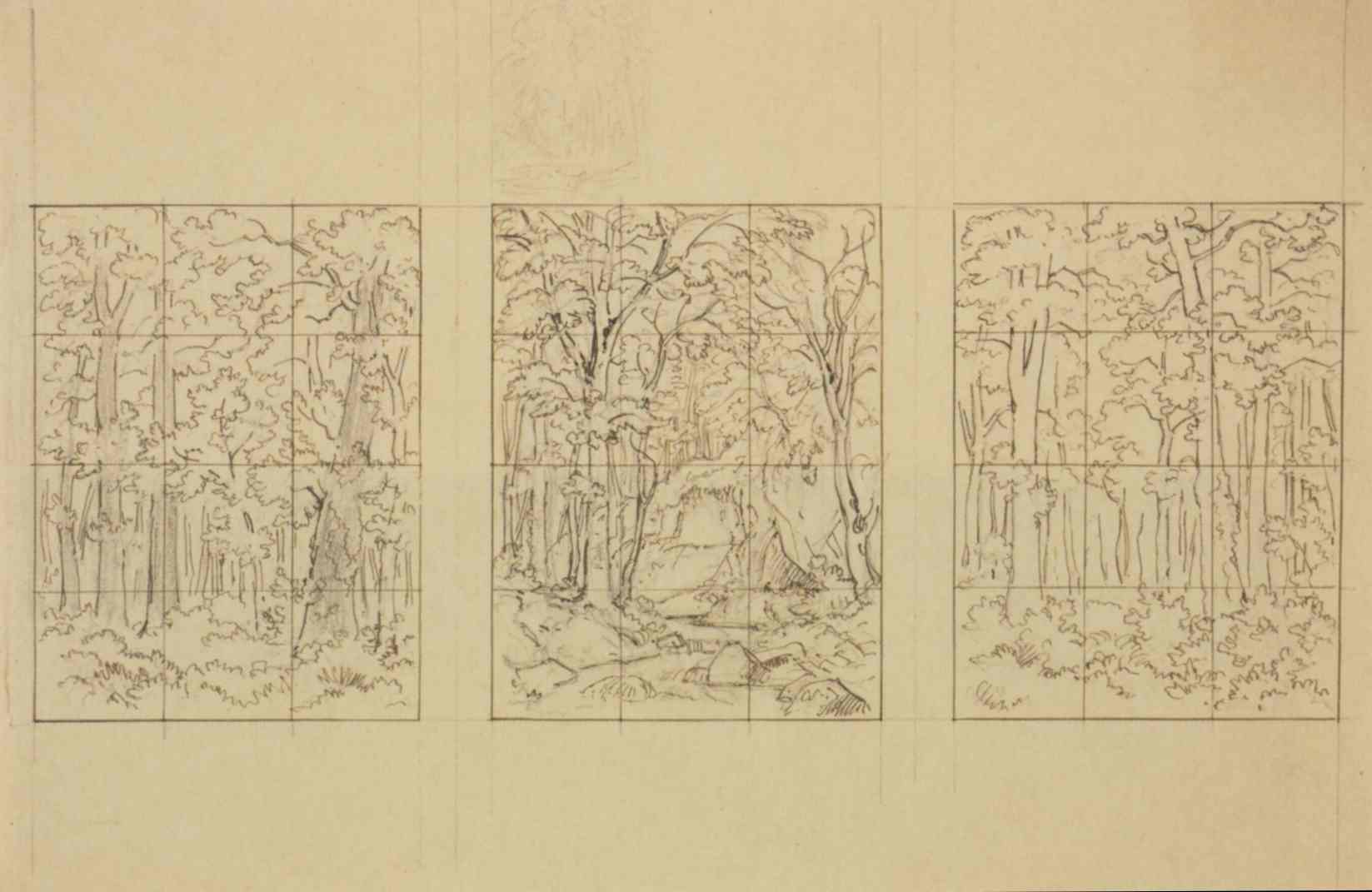 Zünd attended the gymnasium in Lucerne and went on to study painting and drawing in the studio of Jakob Schwegler. He moved to Geneva in 1848, where he worked under two of Switzerland’s leading landscapists, François Diday (1802-77) and Alexandre Calame (1810-64). Zünd met the Munich painter Rudolf Koller (1828-1905) in 1851 and a close friendship quickly developed. He first visited Paris in 1852, where he drew inspiration from his discovery of seventeenth-century painting. He returned to Paris on a number of occasions and also visited Dresden and Munich. He settled near Lucerne in 1863.

[1] There was not a single work for tourists, no views, no sensations relating to the high peaks nearby, just objects which the unpractised eye and uneducated taste would neither detect nor expect to see in nature but which are very much present in it and not in any way constructed […]. – Gottfried Keller describing a visit to Robert Zünd’s studio in 1881. Gottfried Keller in Neue Züricher Zeitung, 23 March 1882. Cited after Peter Fischer, ‘Robert Zünd - eine kritische Würdigung’ in Susanne Neubauer (ed.), Robert Zünd, exhib. cat., Lucerne, Kunstmuseum Luzern, 12 June - 26 September 2004, Wabern-Bern 2004, p. 9.

[2] On viewing the large-format version of An Oak Forest in Zünd’s studio, Keller described Zünd as a painter of ‘the ideal real landscape or the real ideal landscape.’

[4] The Danish painter Christoffer Wilhelm Eckersberg (1783-1853), a professor of perspective at the Copenhagen Academy, is known to have made similar annotations to his paintings and drawings. A number of his textbooks and theoretical treatises on linear perspective have survived as well as an instrument designed for perspective drawing which he named Perspective Octant. Erik Fischer, C. W. Eckersberg. His Mind and Times, Copenhagen 1993, pp. 73-84. Eckersberg published a textbook titled Linearperspectiven, anvendt paa Malerkunsten [linear perspective applied in the art of painting], an album containing 11 etched plates, C.A. Reitzel, Copenhagen 1841.

[5] The drawing was probably transferred either to a larger sheet or directly to the canvas. Zünd’s usual practice was to use a tracing and to transfer the image on the same scale. To do this it was necessary to create a grid of horizontal and vertical lines. There is only one recorded example of Zünd having used a photograph as the model for a painting. This was a portrait photograph of a girl which served as the model for a painting titled Clearing in an Oak Forest, 1903. See Robert Zünd, op. cit., p. 39.