The whites (Pieridae) are sun-loving butterflies named after the colour of their wings. This can range, in fact, from white to beige and yellow, as seen on the underside of the hindwing of the specimen shown here on the right. The delicately structured wings are edged in black with white dots. Grey veins show through the watery white of the wing tissue. Hair is indicated on the body, while faint shading on the wings near the head generates a sense of three-dimensionality. This is enhanced by the shadows cast by the delicately drawn legs, suggestive of calligraphy, and the wings of the butterfly on the right.

Some twenty years ago a leaf by Pieter Holsteijn the Younger showing the same composition and reflecting the same source image was sold at auction in Amsterdam (Christie’s, 25 November 1991, lot 168, 135 x 198 mm, reproduced in black and white; fig. 1). It bears Pieter the Younger’s customary signature, ‘PH.fe.’, with a horizontal stroke at the foot of the monogrammed initials. Heavier shading grants the animals in that work greater threedimensionality. The signature indicates that the artist considered it finished. 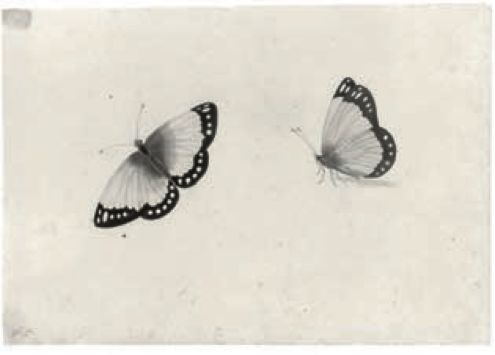