Soon after his arrival in Stockholm in 1829, Peder Balke visited Rosendal Palace, then newly rebuilt, to see Johann Christian Ezdorf’s paintings of Finnmark in the royal collection. He was so impressed by Ezdorf’s work, particularly his landscapes of the North Cape and Vardøhus Fortress, that he resolved to discover the region for himself. Three years later he set off on a trip to the north, exploring Finnmark from spring through fall 1832.[2] From then on, his own landscapes were marked by his experience of the rugged scenery of northern Norway.[3]

Finnmark lies in the extreme northeast of Norway and shares a border with Russia to the east. Balke’s journey took him from Trondheim to Vardø and Vadsø in the extreme east, via the North Cape. A storm off the Nordkyn peninsula forced Balke and his fellow travelers to shelter for a week in Vardøhus Fortress – the subject of the present painting: ‘The day after our arrival at Vardø I crossed the island for a good view of the sea breaking against the cliffs after the hurricane of the previous day, and the magnificent sight that manifested itself to my scrutinizing gaze will never fade from my memory. I had positioned myself on a rocky plateau some 100 feet above the sea, and I felt I had to hold on tight to the cliff as the surf hurled itself against the rock face and with a deafening sound like thunder rolled out again into the heaving sea, only to repeat the same fruitless onslaught on the unshakeable wall around which the mighty waves of the Arctic Ocean swirled.’[4] 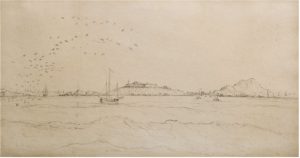 Vardøhus Fortress and the small town of Vardø are seen on the right of the painting. The fortress is Norway’s northernmost fortification. It was built by Håkon V on the island of Vardøya around 1300. Its present octagonal layout dates from 1738. Subjects like the North Cape and Mount Stetind, Vardø and Vardøhus Fortress were to accompany Balke for a lifetime and are leitmotifs in his oeuvre. The motifs and impressions he gathered on that first trip and recorded in a large body of sketches (Fig. 1) were to be of key importance to his further development. They recur continually in his later work. He did not strive for topographical accuracy; instead, he endeavored to produce an exaggerated image of the landscapes of Norway.

Dated 1844, the present seascape belongs to a group of paintings depicting Vardøhus in stormy conditions. It is one of the earliest examples of Balke’s handling of the subject. Extreme weather conditions are a recurrent theme in Balke’s dramatized representation of the Norwegian landscape. These paintings document a decisive stylistic shift and see Balke increasingly consolidating his pictorial means.[5] Since the early 1840s, he had preferred a monochrome palette reminiscent of Dutch grisailles of the seventeenth century. Dark tones dominate the present image, while loose, open accents of pastose white define the crests of the waves and emphasize the agitated motion of the breakers. In the distance the fortress rises from the sea like a strangely glowing apparition. Proceeding from Dutch seventeenth-century marine painting, and the well-known compositions of the Romantic era, Balke developed ‘landscape visions’ (Landschaftsvisionen) of his own.[6] The motif of a tiny ship battling alone against the relentless fury of the sea is drastically simplified and given a metaphorical dimension: it remains uncertain whether human attempts at resistance in the face of untamed nature will succeed or tragically founder.

That the identity of the painting’s first owner should be known is something of an exception in Balke’s oeuvre. An inscription on the verso confirms that the work first changed hands in 1844, the year of its creation – namely during Balke's second stay in Dresden from 1843 to spring 1844.[7] That year it was added to a friendship album owned by Louise Mathilde Franke (1815-45), the wife of Etatsrat Karl Philipp Franke[8] and sister of the painter Lorenz Frölich (1820-1908).