Naum Gabo’s stay in Norway – from late 1915 until early 1917 – marked a period of radical change in his life. He was to find his artistic direction and […] the peace necessary for creativity and for [his] rebirth from an engineer into a sculptor.1 In 1915, he adopted ‘Gabo’, another family name, as his surname to avoid confusion with his older brother, the Constructivist Antoine Pevsner.

Gabo enrolled at Munich University in 1910, taking courses in medicine and later, natural sciences and art history. Alongside his studies he heard lectures given by the art historian Heinrich Wölfflin. He also attended courses in civil engineering2 at the Technical University. His younger brother Alexei joined him in Bavaria in June 1914 but when war was declared all foreigners were ordered to leave Germany. The brothers spent most of the war years as exiles in Norway, where many of Gabo’s important early sculptures were made – among them Constructed Head No. 1, Constructed Head No. 2, Constructed Head No. 3 and Constructed Torso.3

The present sheet of studies is closely associated with the development of the sculpture Constructed Torso. Some of the studies on the sheet are direct preliminary drawings for the motif. Gabo’s first idea may well have been a standing figure which he then developed into a sequence of studies for a kneeling figure. The evolution of the composition is mirrored in the studies on both the recto and the verso (Fig. 1) of the present sheet. Ultimately, Gabo abandoned the idea of a full-length figure and truncated the body just above the knee. The studies show him experimenting with the position of the head and arms. 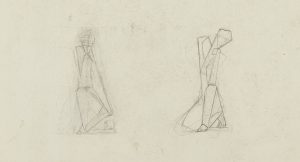 The finished, metal-plate4 version of Constructed Torso is now presumed lost, however two models in cardboard are preserved (Berlinische Galerie, Berlin, and Tate, London).5 Evolving out of Constructed Head No. 3, Constructed Torso shows a progression towards a more complex form of vertical figuration. Gabo’s starting point was not a solid mass of material – his figures were constructed out of single, geometric segments of metal. To create plasticity he instead used the language of line and plane, the instruments of two-dimensionality. In this way, Gabo’s method of constructing sculptures out of single planes of smooth-textured material made him one of the earliest artists to achieve full spatial interpenetration of form.

After the October Revolution, the brothers returned to Russia and in 1920 published their Realistic Manifesto, a work that set out the basic principles of Constructivism. It was to have a formative influence on the development of sculpture. In 1922, Gabo received permission to move to Berlin, where he participated in the ‘Erste Russische Kunstausstellung’ (Fig. 2). In 1935, he was forced to leave Germany to escape persecution under the Nazi regime. He settled in London, later emigrating to the United States where he died in 1977. 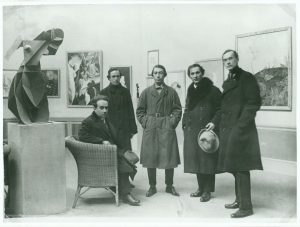 2 In his student days Gabo is known to have familiarized himself with mathematical models. Knowledge of them was to have a profound influence on his development as a sculptor.