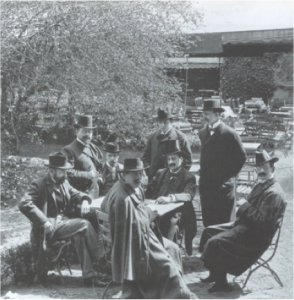 Fig. 1 Slevogt with members of the Berlin Secession, c.1900. The photograph shows Slevogt standing at the left, with Liebermann in a top hat at the center. Corinth is seated in the foreground.

Max Slevogt is one of the three important exponents of German Impressionism – the other two being Lovis Corinth and Max Liebermann (Fig. 1). Slevogt was a prolific and highly versatile artist who worked in a wide range of artistic media. He produced oil paintings, watercolors, drawings and prints. He also completed fresco schemes and stage designs for theater and opera. [1] Additionally, still life was one of his preferred genres.

In his early Berlin years Slevogt’s output of still lifes was small – he produced only very few after his move to the city in 1901 and then no more than a handful around the year 1914. His real interest in the still-life genre did not emerge until the 1920s when he was to produce some of his most vibrant and arresting compositions.[2] Floral still lifes were to be less frequent in his work than still lifes of vegetables or fruit.

Slevogt depicts two bunches of summer flowers in a pair of vases. These are seen from a slightly raised viewpoint and are placed in a sharp diagonal to the picture plane. They are set on the corner of a table jutting into the pictorial space. The jutting corner of the table is a spatial device also found in late nineteenth-century French painting.
Despite the rapidity of Slevogt’s brushwork the flowers are botanically identifiable. Their striking color is reflected in the cut glass facets of the vases. The composition is dominated by the red roses in the larger of the two vases. Some of the roses have passed their peak and are already hanging their heads – suggesting the melancholy of an Indian summer. The smaller, chromatically more refined bunch in the foreground is still in full bloom.

Slevogt’s preoccupation with the still lifes of Manet was particularly marked during his Berlin years. Many of his still lifes reference elements of the compositional structure of Manet’s still lifes. This is still evident in his later works – an example is his predilection for diagonals.