Martinus Rørbye is among the leading representatives of the Danish Golden Age. This era marks the apex of Danish painting, which flourished at the same time as German Romanticism. Significant cross-fertilization of ideas occurred between the Copenhagen Academy and key centers of Romantic thought in Germany, namely the Hamburg and Dresden Academies. Munich, which lay on the route to Rome for artists from the North, was also an important artistic center.[2]

Rørbye set out on his first journey to Italy in 1834 and arrived in Rome on 22 October of that year. He joined the artistic circle of the famous Danish sculptor Bertel Thorvaldsen, who had a large studio in Rome and was the first point of contact for many young artists (fig.1). Rørbye undertook painting excursions in the vicinity of Rome with various artist friends. From 2 to 8 December, for example, he went with Peter Wulff and Graf Holk to explore the area around Sermoneta, a town situated in the foothills of Monti Lepini 70 km south-east of Rome. On 5 December he wrote in his diary that his two friends had gone hunting while he worked on a view of the castle gate in Sermoneta (Jeg maler Borg-Porten). According to his diary, he had also been working on this view the previous day.[3] 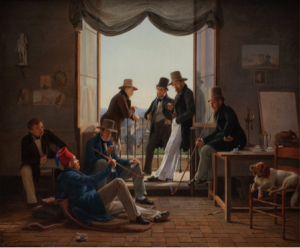 The gray-brown color of the masonry and the effects of light and shadow display fine gradations. In the foreground, the painter depicted a shepherd in a costume typical of the area. Standing by the gate, the entrance to the medieval Castello Caetani, is a man wearing a top hat and black cloak – probably his traveling companion, Graf Holk.[4] Rørbye’s proficiency in capturing specific lighting conditions is shown to best advantage in this oil sketch painted en plein air. He was also clearly interested in the architecture of the medieval structure. Rørbye was a pupil of Christoffer Wilhelm Eckersberg at the Royal Danish Art Academy in Copenhagen, and remained a close friend of his teacher all his life. His architectural pieces, which are characterized by keen observation of the motifs and a marked interest in the strict application of linear perspective, are indebted to Eckersberg’s example. Rørbye intensified this new, reality-based approach in his characteristically meticulous treatment of light, which lends his pictures their distinctive atmosphere.

Martinus Rørbye undertook extended journeys: from 1834 to 1835 he was mostly in Rome and Naples, from October 1835 until May 1836 in Greece and Turkey, traveling afterwards via Italy, Munich, Vienna and Prague to Dresden, where he visited Johan Christian Dahl. After a stay in Berlin, during which he met Christian Daniel Rauch, he traveled via Hamburg and Kiel to Copenhagen. He stayed in Italy again from 1839 to 1841.