Luigi Nono made the first of many study trips to Asolo[3] in 1907. It was here that he executed on 20 February 1912 the first preparatory drawing for the painting titled 1 November.[4] The present oil sketch is clearly a plein-air study with the striking immediacy of a impression captured before the motif. Its spontaneity actively involves the viewer in the creative process. It depicts an L-shaped building in sharply foreshortened perspective – a brief moment of observed reality with the informal character of a snapshot. Nono has used a sharpened brush handle to scratch date and place of execution into the wet paint. He has also added precise colour annotations to define the tonal nuances to be used in working up a final version of the composition in the studio – in this case the painting of the same year titled 1 November[5] (Fig. 1). He exhibited it at the 10th Biennale in Venice in 1912, where it found a buyer.[6]

The three paintings titled 1 November, Collecting Leaves (Serafini 655) and Monks at a Well (Serafini 707) belong to a group of compositions with the seclusion of monastic life as their main theme.[7] 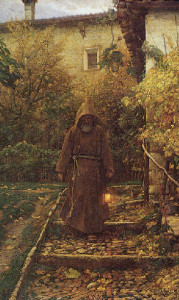 Luigi Nono – the grandfather of the eponymous composer – was born in Fusina near Venice. He grew up in Sacile, a town in the northern Veneto. He enrolled at the Accademia di Belle Arti in Venice and studied from 1865 to 1871 under Pompeo Molmenti (1819-94). At the Academy his work came under the influence of Giacomo Favretto (1849-87), a leading exponent of the Venetian Realist tradition. In 1873 Nono exhibited three paintings at the Accademia di Brera in Milan. By this time he had moved away from academic tradition and his style was more closely related to that of Favretto.

Nono travelled to Florence, Rome and Naples in 1876. In 1878 he was in Vienna. On his visit to Paris in the same year he was greatly impressed by the artists of the Barbizon School. When his father died in 1879 Nono moved the focus of his activities and interests to Venice. In 1888 he made his debut at the ‘Esposizione Nazionale Artistica’ in the Giardini. This exhibition was the forerunner of the Venice Biennale. It was originally launched in 1895 under the title ‘I Esposizione Internazionale d’Arte della Città di Venezia’ [First International Art Exhibition of the City of Venice].[8] Nono was a regular contributor to the Biennale exhibitions. His work was also shown in Berlin, Munich and St. Petersburg. He was appointed a professor at the Accademia di Belle Arti in Venice in 1899. He is regarded as one of the most popular and sought-after Venetian artists of the nineteenth century.[9] He, together with Favretto and Guglielmo Ciardi (1842-1917), had a formative influence on Realist developments in Venice at the turn of the century.

Nono’s work displays a preference for subjects critical of social conditions and motifs that focus on peasant and working-class life. The painting titled Returning from the Fields, executed in 1873, is a good example. His important painting titled Refugium peccatorum [Refuge of Sinners] won the Gold Medal at the Munich International Exhibition in 1883 and saw him advance to the forefront of socio-critical Realism in Italy.[10]