But the best and most willing model is ‛oneself’. (Lovis Corinth, Das Erlernen der Malerei, 1908)

The self-portrait genre is a leitmotif throughout Lovis Corinth’s œuvre. He produced an extensive body of self-portraits which show many selves, alternately displaying disarming candor, or sensitivity and tenderness. The self-portraits embody a struggle for veracity and offer a wealth of insights into Corinth’s multifaceted artistic personality. 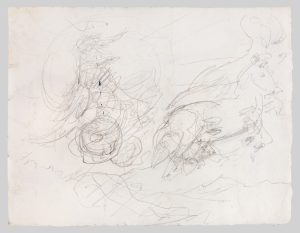 Fig. 1 Lovis Corinth, Phaethon and the Sun Chariot, pencil on paper, 28 x 21.5, verso of the Self-Portrait

Corinth’s self-portraits are invariably a deep reflection on mortality. The self-portraits he executed before his stroke in 1911 demonstrate a certain self-confidence, as in the celebrated half-figure self-portrait of 1896 in which he juxtaposes a frontal view of his burly frame with a skeleton used as a piece of studio equipment. But the tone is quite different in the present watercolor, which certainly post-dates the 1911 stroke and is dateable to circa 1916. The bombastic self-dramatization of the earlier work has given way to a sense of deep-seated insecurity. Corinth conveys an impression of fragility: partially paralyzed by the right-hemispheric stroke, he has reached an existential turning point – although this would have little immediate impact on his artistic output. Facing the specter of mortality he nevertheless rallied his artistic energies and went on to develop a powerful late style. The present self-portrait powerfully expresses this ambivalence. While his hunched stance communicates a certain irresolution the clear blue eyes convey a sense of optimism. This was to linger until the late self-portraits of the 1920s.1

The watercolor boasts an impressive ownership history. One former owner, the Berlin collector Dr. Ludwig Burchard, managed to flee Germany in time, taking the watercolor with him when he went into exile in London. In 1938, he loaned it to the outstanding ‘Exhibition of Twentieth Century German Art’ which was staged at the New Burlington Galleries in London. The celebrated art historian and art critic Herbert Read chaired the organizing committe. The exhibition featured important German Expressionist works which emigrants from Germany and exiled artists denounced as ‛degenerates’ had brought with them on their flight to England. Today, the exhibition is regarded as one of the most important projects then to have been staged in protest against the cultural policies practised by the National Socialist regime.