In early 1820, Carl Gustav Carus and his wife Caroline paid a visit to Johan Christian Dahl at his studio. Discussing the visit the following day, Caroline commented: How strange are Dahl’s skies. Yet he is surely not a devout man? [1] The remark triggered a swift reaction in Carus who went on to cite it enthusiastically in a letter dated 19 February 1820 to his friend Johann Gottlob Regis, a prominent literary figure and translator of Shakespeare. The remark encapsulates the prevailing intellectual climate at the time of Dahl’s arrival in Dresden. But it also demonstrates how the innovatory quality of his work had not passed unnoticed. In their resolute adherence to the observation of nature his oil sketches exude the spirit of the Enlightenment – more physics than metaphysics. In no other motif does Dahl’s artistic resolve exert such fascination. Exceptional powers of observation are required to capture the ephemeral form of a cloud, coupled with extraordinary painterly virtuosity – rapid, sure brushwork, tones applied wet in wet, pigments sometimes mixed directly on the support. 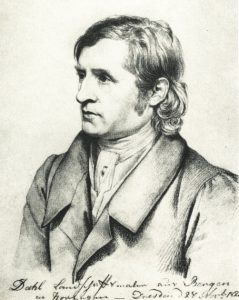 Carus and Friedrich were not immediately able to fully appreciate the new forms of artistic expression Dahl brought with him to Dresden. Nonetheless, both artists were to learn from his example and their work is clearly indebted to his influence. It was Dahl who encouraged them to become keen observers of nature and to record their impressions in oil sketches made en plein-air. Dahl’s influence on Friedrich is particularly marked in the years 1823 to 1824 when the two artists shared a house in Dresden.

Cloud studies have been singled out for having particular importance within Romantic art. Growing scientific interest in meteorology in early-nineteenth century England encouraged a number of artists to study cloud formations and atmospheric effects in detail. John Constable’s cloud studies are the best-known examples, but artists and academics were beginning to show lively interest in the Ungreifbare Masse in Saxony as well. Goethe himself introduced Carus to the subject and lent Dahl a copy of Luke Howard’s key work entitled On the modifications of clouds (1802).[2]

In the present oil sketch Dahl depicts a radiant evening sky viewed against the setting sun, which is partly obscured by a dark bank of clouds. Careful study of the sky reveals an intense variety of coloristic nuances. The narrow strip of summarily sketched vegetation serves as a repoussoir, while in the background the viewer’s eye picks out the gently sloping, layered landscape of the Sächsische Schweiz. Examined at close quarters, the virtuosity of the brushwork and its textural range astound. Viewed from a greater distance, the full spatial impact of this oil study becomes apparent – a small masterwork by Johan Christian Clausen Dahl that conveys the palpable atmosphere of a fading summer’s day.