Moonlight over the River Oder at Swinemünde, Dresden 1839

There reigns within me a certain predilection for coastlines, mountainous regions, waterfalls, sea vessels and harbours in daylight and by moonlight.[2] (Dahl, 1828)

Dahl, returning from his third visit to Norway in 1839, chose to take a new route home.[3] In Christiania, he boarded a ship bound for Gothenburg. The next port of call was Ystad in southern Sweden and from there, the ship crossed the Baltic to Swinemünde. The town lies on the river Swina, an arm of the Oder estuary, and was then an important Prussian harbour. The two pencil and wash drawings Dahl made from the deck of the ship on 8 October 1839 record his first impressions of the harbour.[4] 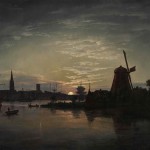 In December 1839, he made two small-format oil studies of nocturnal motifs based on the pencil drawings. He is known to have sent one of the two to a Frau von Coopmans in Brussels at some point that December.[5] The Coopmans sketch shows a windmill on the right of the image and there is no sailing boat. The second oil sketch – the present work – is a nocturnal scene. It depicts Swinemünde silhouetted against a night sky. Dahl’s rendering of the effects of light is highly atmospheric. Silvery moonlight, half obscured by banks of cloud, glints on the surface of the water. At the left of the image are the dark shapes of a large two-master and a tiny dinghy hugging its bow. The ship’s masts and the dark horizon line are set against the inky purple of the night sky. A tall, gothic-style steeple at the extreme left is simply artistic license – a product of the artist’s imagination. Dahl enriches a large-format painting of 1840 titled A Moonlit Night at Swinemünde (Fig. 1) with a similar artistic device.[6] This painting is now in the collection of the Pommersches Landesmuseum in Greifswald.[7]

In the mid 1820s Dahl compiled what he called a Liber Veritatis, a collection of drawings to serve as a visual aide-memoire of works he had sold or had given to friends. An autograph annotation adjacent to sheet number LV 592 of the Liber Veritatis states that he gave the present landscape sketch painted on the verso of his FLORA invitation card, to Dr. Hille, in 1839.[8] Most of the drawings in the collection are accompanied by autograph notes on the size and ownership of the originals. Dahl was a member of the Dresden botanical and horticultural association known as FLORA and – as is the case of the present sketch – often used the monthly invitation cards to sketch small views in oil. He would give many of these to friends as presents.[9]

On completion of his studies at the Copenhagen Academy of Fine Arts Dahl set off on the Grand Tour in the summer of 1818. He broke his journey in Dresden in the autumn. Here, he came into contact with Caspar David Friedrich who was to become a close friend. He travelled to Italy in 1820 but soon returned to Dresden. He settled permanently in the city in the following year. From 1823 onwards, Dahl and Friedrich shared a house with a view over the River Elbe. Dahl and Friedrich, together with Carl Gustav Carus, played a major role in the development of German Romantic painting. All three are regarded as the leading Dresden painters of the age.[10]

[6] In his paintings, Caspar David Friedrich, Dahl’s close friend in Dresden, is also known to have deployed motifs that were topographically incorrect or unrelated to the immediate subject of the work. See Haese and Schröder, op. cit., p. 13 and p. 15.