Pines in the Barbarini Gardens at Castel Gandolfo, 1776

Jakob Philipp Hackert arrived in Rome in the winter of 1768 and immediately started to explore the landscapes of the surrounding countryside and the Alban Hills. Records show that by 1775 he was the owner of a country house on Lake Albano. Since antiquity, the area had been popular as an escape for citizens of Rome seeking to avoid the heat of the city. The drawings which Hackert produced near Albano in the 1770s chiefly focus on trees. They are sometimes set in topographical context but more often singled out as solitary pictorial motifs isolated from their natural context. Hackert’s predilection for solitary trees is a recurrent feature of his work. His tree portraits appear in his oeuvre at all stages of his career. Masterly depictions of towering oaks and chestnut trees fill the foreground of almost all his paintings. His aim was to identify and depict the distinctive elements of an individual tree – the details that made it uniquely recognizable. A comment by an unknown author published in an article after Hackert’s death reads: Among other things, he was very accomplished in portraying the characteristics of a tree; it therefore displeased him greatly when one was unable to identify every single tree in his paintings at first viewing.[1]

Hackert spent the summer of 1776 at his country house. Two drawings, both dated, document visits to nearby Lake Nemi and the village of Ariccia.[2] Hackert’s topographical inscription on the present drawing states that it was executed at Castel Gandolfo. The Papal Palace of Castel Gandolfo, the summer residence of the popes, is on Lake Albano. Hackert depicted the four tall pines in this drawing as they stood in the gardens of the seventeenth-century Villa Barberini adjoining the Villa papale. The smaller trees and bushes at the left provide a scale against which the height of the pines can be measured. In the far distance is a view of Lake Albano. The slender elegance of the pine tree had preoccupied Hackert since his arrival in Rome. The depiction of its rough bark, its crown rising above a dense but delicate network of branches, and its umbrella-like shape with the thick bunches of needles had presented an artistic challenge ever since he first encountered the Roman variety of the tree in 1769. Two examples of this preoccupation are a drawing of a single pine near the village of Genzano overlooking Lake Nemi dated 1769 (Fig. 1)[3] and an undated sheet – very probably executed in the early 1770s – which depicts two pines in the park of the Villa Doria Pamphili in Rome.[4] In all three drawings Hackert’s central interest lay in the juxtaposition of the pines and the sky, with the chief focus on their height set against the glaring brightness of a cloudless sky. The meticulous topographical inscriptions on Hackert’s tree portraits are pointers to the viewer that the properties of his drawings are not limited to their aesthetic qualities but are in most cases to be interpreted as a form of documentation. The trees function as landmarks – landmarks making it possible to identify the different stages of Hackert’s journey and to record the exact viewpoint from which a particular segment of landscape had been depicted – one example is the distant view over Lake Albano present in this drawing. Hackert in fact compiled something of an inventory of the regions of Italy he visited over the years. Thus, in his early sixties, he could write to Goethe with a sense of satisfaction: I am not wanting in subject matter, I have drawn with accuracy thousands of drawings after nature, so that I may claim that I very nearly have the Papal States and the Kingdom of Naples and Sicily in my portfolio.[5] This drawing therefore has a double function. First, it is an integral part of Hackert’s systematic documentation of the landscapes and trees of the Alban Hills in the 1770s. Second, it is an independent work of art in its own right. It is also a fine example of the high level of painterly skill Hackert had attained in the depiction of trees in the late 1770s. 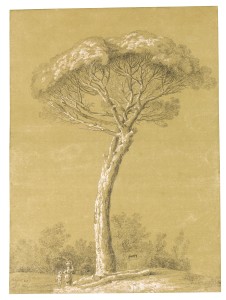