Helene Schjerfbeck, who was born in Helsinki in 1862, is today regarded as one of the pioneers of Scandinavian modernism. After suffering a bad fall at the age of four she experienced permanent difficulty in walking and tired easily, so she was schooled at home. She had precocious artistic talent and at the age of eleven was encouraged to train at a private drawing school and later a private academy in Helsinki, before eventually moving to Paris. In those days private tuition was the only form of artistic education open to women artists. Women were denied access to public art academies until the early 1920s, a fact which significantly hampered their individual artistic development.

Despite her quiet, introvert manner, Schjerfbeck set her sights high. Determined to prove her talent, she succeeded in obtaining a grant to hone her painting skills in France. Extended stays in Paris and Brittany between 1880 and 1890 were to have a formative influence on her career. In her early Paris years she studied at a painting studio for ladies, and at the private Académie Colarossi. Her diary entries give an account of her contacts to academic painters like Leon Bonnat, Jules Bastien-Lepage and Albert Edelfelt. But she was also an enthusiastic supporter of Symbolism during her time in Paris and in the years up to 1900. She met Henri Bouvet and was introduced by him to Puvis de Chavannes. The Swedish Symbolist painter Olof Sager-Nelson was another important point of contact. She saw work by Cézanne, Degas and Manet and discovered Japanese woodblock prints. All this was to have a lasting impact on her work. She exhibited at least three times at the Paris Salon, where her paintings were particularly well received.

In 1895 – by then she was back in Finland - her delicate health began to deteriorate. She no longer had the strength to travel but nevertheless managed to continue to exhibit her work. She steeped herself in the latest trends in the world of art and fashion studying international magazines to stay in touch. In 1902, prompted by a desire for solitude and hoping to regain her strength, she decided to move to Hyvinkää, a small industrial town some 50 kilometers north of Helsinki. Her state of health by this time was precarious and she suffered from bouts of self-doubt. The Schjerfbeck expert Leena Ahtola-Moorehouse interprets this reclusive time as the period in which she reached artistic maturity. In the seclusion of Hyvinkää she could regenerate, and was able to consolidate the wealth of artistic experience she had gathered over the previous twenty years. From 1905 onwards, she developed her own highly distinctive style. Invitations to exhibit in Finland, Sweden and Denmark followed. In 1912, this interval of self-enforced isolation ended. The hiatus is almost certainly attributable to her friendship with Gösta Stenman, a young Swedish art dealer, and Einar Reuter, a writer and painter. Stenman was a great admirer of her work and a regular buyer. He owned a gallery in Helsinki where he regularly staged successful selling exhibitions of her paintings. A lifelong friendship developed between Schjerfbeck and Reuter. He actively collected her work and in 1917 published the first monograph on her under the nom de plume ‘H. Athela’. Reuter and Stenman supplied Schjerfbeck with up-to-date literature on developments in the international art world. Evidence of her intensive study of the work of Munch, Juan Gris and Marie Laurencin emerges from Schjerfbeck’s correspondence. In later years, partly due to the scarcity of models, she would frequently reinterpret her earlier themes, calling them Reincarnations.

Today, Schjerfbeck is one of Scandinavia’s best-known artists. Her work is represented in a large number of leading museums. Exhibitions in Germany, the Netherlands and the United States have helped to bring her artistic achievement to the attention of a wider international public.

In the summer of 1902 Helene Schjerfbeck moved with her mother to the small town of Hyvinkää (Swedish: Hyvinge). She had reached the limits of her strength and needed to reorganize her life after stressful years spent teaching at the art school of the Finnish Art Society in Helsinki. For the next fifteen years Schjerfbeck did not leave Hyvinkää or the surrounding area.

Hyvinkää was ideal for her at this point in her life. The local inhabitants were an interesting, multinational crowd – beside the ordinary factory workers, farmhands, railway workers and their children – and nature was on the doorstep. At the time, Schjerfbeck was interested in portraiture and would choose her sitters from the local community. The sudden interest she developed in the year 1914 in painting landscapes was quite exceptional.Whenever Schjerfbeck turned to landscape painting, she was guided by an interest in new perspectives, more inventive compositions and a bolder palette. In her youth she had painted a number of landscapes of Brittany in sumptuous, jewel-like colour – for example Shadow on the Wall (1883) or Clothes Drying (1883). These paintings experiment with modern ways of creating space. She continued to pursue an interest in landscape in Finland and Italy in the 1890s. Landscape at Hyvinkää dates from 1914. The painting reflects Schjerfbeck’s desire and struggle to depict landscape in an entirely unprecedented manner. It is painted in oil on cardboard, a technique new to her. Several landscapes dating from the same period depict settings near her house in Hyvinkää. Examples are Apple Tree in Blossom (1913-14), The Well (1914) and Birch Avenue (c.1915). They are also painted on cardboard even though the medium is gouache rather than oil paint. 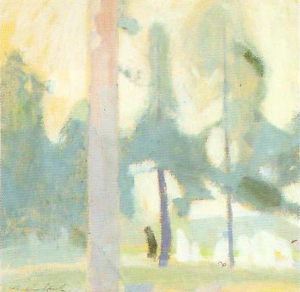 The fresh, relatively bright palette indicates the painting’s execution during spring. Schjerfbeck discusses the subject in a letter dated 15 June 1914 to Ada Thilén, a friend and fellow artist. The painting she refers to in the letter is not the present painting but a much smaller study for it, with staffage in the background (Fig. 1). In his 1953 monograph Ahtela describes it as ‘A Forest View from Hyvinkää, 29 x 32 cm’. Schjerfbeck had just taken up the technique of painting on cardboard, and describes her experience: ‘Now I am trying to paint on cardboard, at first it was frighteningly smooth and slippery but it was soon absorbed and the color becomes matt, I think it has advantages in the end.’ [‘Nu försöker jag måla på papp, först var det skrämmande glatt och halkade men det suges fort in och färgen blir matt, jag tror det har fördelar mot slutet’]. Landscape at Hyvinkää features precisely this matt finish.

Schjerfbeck had shown interest in Japanese art even before 1900, but after the turn of the century her delight in ‘Japanese perspective’ increased. In the present composition Schjerfbeck’s bold placement of a tree trunk derives directly from the dramatic perspective settings of Japanese color woodcuts. One section is slightly darker than the other and two tiny, indistinct figures can be detected in front of the dark green of the forest. The larger section features three tall, delicately defined trees silhouetted against a Nordic evening sky. The charcoal lines enhance the fragility and delicacy of the atmosphere. The trees seem to be from another world – they have a poetic quality and prefigure the even frailer tree trunks in one of Schjerfbeck’s major paintings, The Tapestry (1914-16). Typically for Schjerfbeck, the application of color is uneven, scratched out in parts and blurred shapes.

Landscape at Hyvinkää (Tree Trunk and Pines) was very probably sold by Helene Schjerfbeck’s brother, the architect Magnus Schjerfbeck, to Carl Lüchou, who was Traffic Inspector of the State Railroads in Helsinki, fairly soon after its completion. Since then the painting has remained in the possession of the Lüchou family.