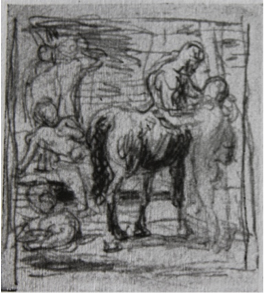 This sheet is one of a series of drawings on the subject of Chiron and Achilles. Meier-Graefe dates the series to the year 1883, citing Viktor zur Helle (1839-1904), a pupil of Marées,[1] as recounted to the painter Franz Pallenberg. Zur Helle asked Marées to give him a personal memento before leaving Rome. This was the genesis of Marées' series of drawings known as Chiron and Achilles. As Meier-Graefe notes: Marées satisfied his [zur Helle's] wish almost immediately. Picking up an envelope at random, he rapidly sketched the motif as a symbol of the relationship between teacher and pupil (Fig. 1).[2] When Marées left Rome it was almost certainly the beginning of a journey to Germany and this took place in 1883.

Marées very possibly saw himself in the figure of the bearded centaur. In Greek mythology Chiron, a wise and learned centaur, acted as teacher to Achilles[3] and initiated Asclepius, a hero and god of medicine, into the art of healing.

The large number of known studies on the theme of Chiron and Achilles would seem to indicate that he intended them as preparatory to a painting. It is not known why the work was never executed. It is quite possible that the two female figures depicted in the background of the farewell scene in the present sheet are dryads (Fig. 2).[4] In Greek mythology, the dryads are nymphs who preside over the groves and forests. 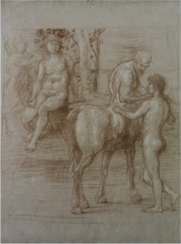 A distinguishing feature of Hans von Marées' work is his highly differentiated treatment of the physical properties, poses and gestures of his figures and of their relationship to one another. His nudes, for example, are never depicted in motion or action. He adopts a wholly classical approach, much along the lines of Ancient Greek sculpture, preferring idealization at the expense of individuality and contemporary influences. His work is indebted to the resurgent fascination for classical antiquity that began in the nineteenth-century and continued into the modern era, particularly in the work of Pablo Picasso and Max Beckmann.

The exceptional quality of the present sheet lies in the fine state of preservation of the extensively applied wash and subtle gradations of white heightening. The study has the character of a grisaille rather than of a drawing. Regrettably, chemical processes have led to severe pigment degradation in Marées' canvases. Many scholars unjustly regard him as an artist whose primary concern was form, to the neglect of colour. However, the small body of frescoes he produced give an idea of his finely nuanced colouristic approach. One example is the magnificent decorative scheme for the library of the Stazione Zoologica Anton Dohrn in Naples, worldwide one of the oldest research institutions of its kind. In 1987, Christian Lenz pointed out that in many ways the work of Marées demands to be reappraised.[5]

Marées trained at the Berlin Academy of Art under Karl Steffeck from 1853 to 1855. He moved to Munich in 1857. In 1864, he was commissioned by Adolf Friedrich Graf von Schack to make copies after Italian Old Masters in Florence and Rome. After relations with Schack broke down in 1868, Marées spent a number of years in Germany. But he returned to Italy where he settled more or less permanently in 1873. He carried out the decorative scheme for the library of the Stazione Zoologica with a friend, the painter Adolf von Hildebrand. In 1874, the two artists shared a studio at the former monastery of S. Franceso di Paolo near Florence. When this friendship also broke down - in 1875 - Marées moved to Rome.

His compositions frequently seem alien to the age in which they were painted. His figures, strongly influenced by his perceptions of classical antiquity, address the universal and perennial questions of the human condition.[6]