Oil on paper, laid down on cardboard, 28.5 x 41.5 cm
Bearing the estate stamp on the backing board

Sketching outdoors before nature was a compulsory part of the curriculum for aspiring landscape painters enrolled at the Vienna Academy of Fine Arts in the early nineteenth century. In 1817, as a student of the Academy, Friedrich Loos undertook a sketching trip to the Höllental and the Schneeberg south-west of Vienna under the guidance of his professor, Joseph Mössmer. This was to provide the impulse for extensive excursions on which he explored and observed nature, painting and sketching en plein-air in ever-changing, often distant locations. Dependent on the support of patrons and regular commissions from clients, he was permanently on the lookout for fresh motifs. This perhaps explains why he was constantly on the move – from Salzburg to Vienna, Klosterneuburg, Rome, Bremen and Kiel – and why his search for new subjects took him as far afield as Istria and Norway.1

Loos was born in Graz in 1797, but raised in Vienna. He entered the Vienna Academy in 1816 and received a training rooted in eighteenth-century academic tradition under Mößmer and J. Fischer. In his early career he taught drawing. He was also active as a printmaker and reproduced the work of other artists. From 1825 to 1835 he lived in Salzburg. A first breakthrough came in 1830 when he collaborated with his friend Johann Michael Sattler on a panoramic view of the city. At the time, Salzburg and the Salzkammergut were as popular as Italy among painters from northern Europe like Ferdinand Olivier, Julius Schnorr von Carolsfeld, Heinrich Reinhold, Carl Rottmann, Johann Adam Klein and Ludwig Richter. Loos undertook many hiking tours in the environs of Salzburg and explored the Alpine landscapes of the region. He found many of his motifs on and around the Mönchsberg massif (Fig. 1) – where the present oil study almost certainly was executed.2 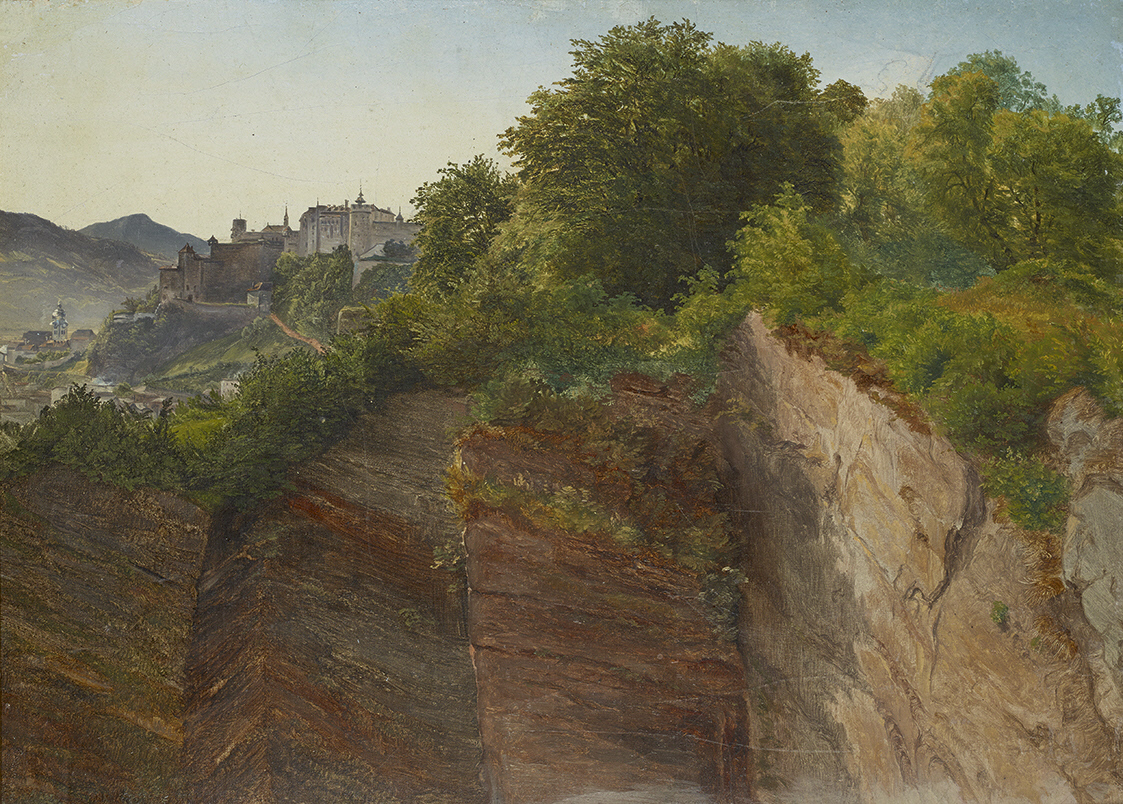 This delicately executed oil study depicts an outcrop of rock set in the confined space of a forest hollow – a segment of observed nature that has the spontaneity of a snapshot. The trees are abruptly truncated above the outcrop and the low viewpoint Loos has chosen conveys an impression of monumentality. He was evidently attracted by the contrast between the deep russet tone of the rock and the lush green of the vegetation. He exploits the subtle tonal nuances of a reduced palette to maximum effect. No sky is discernible and there is only a glancing suggestion of sunlight. The details of the torn toots, the delicate foliage and the mauve petals of the tiny flower that catches the viewer’s eye at the center of the image are handled with meticulous precision.

Loos returned to Vienna in 1835 but moved to Klosterneuburg in 1842. In 1846 he travelled to Florence and then on to Rome, where he settled at the age of fifty – the fulfilment of a lifelong wish. Given his artistic interests, he was less drawn to the German artistic community in Rome than to other artists working sur le motif in the city and its environs. He left Rome in 1852, returning north via Switzerland. In Düsseldorf, his work was well received by Johann Wilhelm Schirmer. He is also known to have spent time in Berlin, Oldenburg, Hamburg and Copenhagen. The final years of his life were spent in Kiel.

Today, Loos is perhaps best known for his panoramic landscapes. In 2015, exhibitions dedicated solely to his work were held at the Österreichische Galerie Belvedere in Vienna and the Stadtmuseum in Kiel.3

2 Loos’s oeuvre was only rediscovered in 1924-5 when works from his estate were exhibited in Leipzig, Berlin and Dresden (see Thieme-Becker, Künstlerlexikon, XXIII, Leipzig 1927).