From the Renaissance onwards, one of the declared aims of the fine arts was to produce as accurate an image as possible of the physical world in drawings or paintings. The boundaries between science and art were not always as sharply defined as they are today. This meant that an accurate image of the natural world was considered both as a scientific and as an artistic achievement. This group of watercolors by the French natural scientist François Jean-Baptiste Ménard de la Groye is squarely in this tradition. Although his drawings were produced chiefly for scientific purposes, they are clearly of exceptional aesthetic quality. It is arguable that Ménard de la Groye’s drawings coincide with the high point of a long European tradition – one that was to end with the spread of photography a few decades later. That a natural scientist like Ménard de la Groye should have produced original illustrations of such outstanding quality is more than remarkable. The development of drawing skills was an integral part of scientific training in the eighteenth and early nineteenth century, in the absence of other reproductive processes – photography, for example. A number of other natural scientists produced drawings of the highest quality – Alexander von Humboldt’s self-portrait, executed in 1814, is a good example (Fig. 1). Ménard de la Groye’s exquisite drawings certainly testify to the presence of exceptional artistic talent. 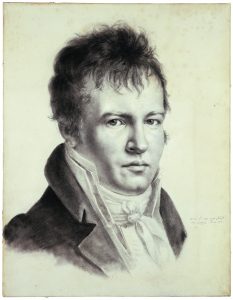 François Jean-Baptiste Ménard de la Groye was an important French geologist, volcanologist, explorer and scientist. He discovered his true vocation – the natural sciences – at a very early age. He studied in Paris from 1799 to 1807, where he attended regular lecture courses at the Muséum d'Histoire naturelle, the École Polytechnique and the École des mines. He began his career as an assistant to Jean-Baptiste de Lamarck (1744-1829) and Alexandre Brongniart (1770-1847), both of whom conducted research into the fossil mollusks of the Paris Basin. Ménard de la Groye went on to earn wide recognition for his studies of mollusks. He particularly distinguished himself by his discovery of a new marine mollusk or clam species, Panopea aldrovandi Ménard de la Groye, which is named in his honor. One of the present sheets of studies portrays a specimen (Fig. 2). The discovery was published in a leading scientific journal in 1807.[1] 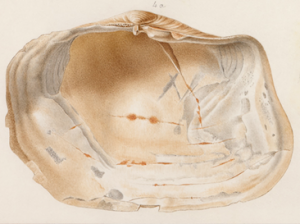 Ménard de la Groye traveled widely on scientific expeditions in central and southern France, and in the Rhineland, Switzerland and Italy, going on to publish a number of groundbreaking articles based on his findings. He was in Naples in 1813-4 and made several excursions to Vesuvius to study the volcano and its environs. He also witnessed the renewal of volcanic activity. His publication titled Observations avec réflexions sur l’état et les phénomènes du Vésuve (1814-5) drew the attention of Georges Cuvier (1769-1832), who in 1818 offered him a prominent teaching post in the Natural History Department at the Collège de France. He taught there until his death in 1827.[2]