Study for the Painting ‘Female Nude Putting on her Slippers’,
Carlsberg Glyptotek, Copenhagen, 1843

Christoph Wilhelm Eckersberg and Johan Ludvig Lund were appointed as professors at the Royal Danish Academy of Fine Arts in Copenhagen in 1818. They wasted no time in reforming the curriculum by changing teaching methods. They introduced figure drawing classes where their students worked from a living male model. Until then, students had studied the nude figure exclusively from plaster casts after the antique. In 1823, the Academy founded an award for the best life drawing and a modest sum was even set aside in prize money. The students were given the task of setting up the model’s poses and the objective of classes was to achieve a maximum of perspectival accuracy.

Students of the figure drawing class had their first opportunity to sketch a female model at an evening life class held in January 1833, almost certainly in Eckersberg’s lodgings. Classes involving a nude female model were still seen by officialdom as violations of academic and social norms. Regular posing sessions with female models are known to have taken place, especially in the summers following 1833. In 1839, Eckersberg introduced summer classes specifically designed to train the students in life drawing under natural light. Records show that summer classes were held in the years 1839 to 1841, 1843, 1844 and 1847 to 1850. Most of these were posing sessions with female models. Eckersberg sketched and painted with the students. He often chose to work in a small format but would urge students to test the advantages of larger formats. Thanks to these reforms in teaching methods the Royal Danish Academy of Fine Arts in Copenhagen was to emerge as European leader in the institutionalization of life classes working with female models.

Eckerberg’s pupils - those known by name include Jens Vilhelm Top, Joel Ballin, H .J. Hammer, Friederich Theodor Baasch and Carl Balsgaard – appear to have been happy with the reforms. In summer 1843 they requested that the directors of the Academy keep on a female model who had sat for them in June of that year so that posing sessions could continue during summer classes without a break in their training. Eckersberg notes in his diary that the request was granted and the model, a Madam Hack, stood for the class again from 25 July to 13 September, although set up in a different pose.

The present study of a seated female nude was executed by Eckersberg during this period. It is a study for the painting Female Nude Putting on her Slippers. This important work is now in the collection of the Ny Carlsberg Glyptotek in Copenhagen (Fig. 1). 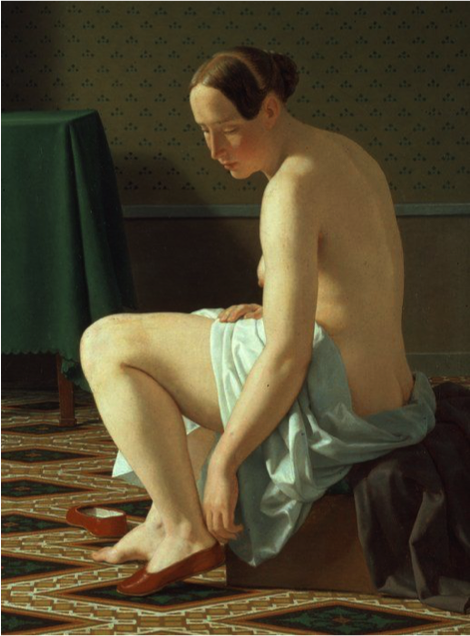 An award from the Academy enabled Eckersberg to travel abroad in 1811-12. He spent two years in Paris, where he was accepted as a pupil of one of the leading French artists of the time – Jacques-Louis David. The stay had a vital influence on his artistic development and introduced him to an entirely new approach to the study and depiction of the human form – working from living male and female models. In Copenhagen he had studied the nude figure from casts and made sketches under artificial light. In David’s studio he began to sketch and paint from life and to study the model in natural light. This allowed him to observe and record with greater precision, and to handle gradations of light and, as a result, spatial representation with greater sensitivity.

2 Now in the collection of the Musée du Louvre.