The Ruins of Eldena Abbey near Greifswald with a Thatched Cottage by Moonlight, 1819/20

Carus is one of the outstanding figures of the age of Goethe. A man of many talents, he was active as a physician, a natural scientist, a man of letters as well as being a painter of the first rank. He played a prominent role in the German Romantic movement both as an artist and as an author of important theoretical writings. His Briefe zur Landschaftsmalerei are regarded as of seminal importance in the understanding of early nineteenth-century thinking about art.[2] He settled permanently in Dresden in 1814.

The present oil painting was executed by Carus around 1820. It shows the preserved west façade of Eldena, a former Cistercian abbey, as seen from the south-west. It is the first of three versions of the subject (fig. 2).[3] It is based on a preparatory study drawn sur le motif on the evening of 13 August 1819 (fig. 1).[4] Carus’s visit to Greifswald and the nearby ruins of Eldena Abbey marked the first stage of an eight-day journey to Rügen in the footsteps of Caspar David Friedrich. The beginning of Carus’s close friendship with Friedrich dates from 1818. 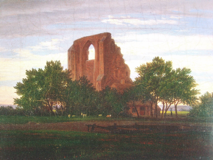 Friedrich was born and grew up in Greifswald. The landscapes of the countryside near Greifswald and the ruins of Eldena Abbey occupied a central role in his work. They represented something of a leitmotif which he used to illustrate the transitory nature of existence. In his early work Carus frequently draws on Friedrich’s oeuvre, as exemplified by the sepia drawing executed by Friedrich in 1814 which provided the inspiration for Carus’s view of the motif (fig. 2).[5]

Carus’s landscapes of the early 1820s are entirely romantic in character. In this he was clearly influenced by Friedrich. For his depiction of the tall, gaunt form of the ruined abbey silhouetted against the night sky he chooses a low viewpoint and focusses on a concentrated, narrow format. The steely gleam of the moonshine creates a distorting, theatrical effect, directing the viewer’s eye towards the Gothic arch of the window and contrasting with the warm glow of candlelight from the cottage beneath.

Carus’s masterly handling of moonlight and related phenomena reflects the intensity of his interest in the study of the night sky. This interest derives to some extent from the emotional power attributed to the moon in the literature and painting of the Romantic age. But it also derives in part from his own scientific research into atmospheric phenomena. He devotes a whole chapter of his theoretical writings – Briefe über Landschaftsmalerei – to what he describes as ‘moonlight pictures’.[6] He seeks to combine the Romantic synthesis of ‘sentiment’ and ‘nature’ with a determination to objectify the depiction of nature on the basis of a precise study of light conditions, interaction of colours and focus on topographical features.[7]

Carus’s oeuvre is indebted to the enduring influence of Friedrich. However, as his artistic career progressed he was to monitor his perception of Friedrich’s work with increasing awareness. In 1819, in a letter to his friend Johann Gottlob Regis, he describes Friedrich’s Snow-covered Graveyard[8] as follows: […] The cadavers of the oaks are entirely realistic but the whole thing looks somewhat baroque and architectonic. And it seems as if they all have a tendency towards the architectural, limiting the freedom of the natural landscape [...].[9]

Against the background of the romantic emotion of Friedrich’s work Carus juxtaposes a new, scientific perception of nature combined with a striving for objectivity. It is precisely this that defines the uniqueness of Carus’s artistic and art-theoretical oeuvre.

[1] A contemporary critic writing in Schorns Kunstblatt 1, 1820, p.380 describes the painting as: No. 162, Window of a ruined abbey through which one spies a moonlit sky. This depiction has a place in the realm of mysticism, however I wish to reserve more extended discussion for Friedrich. In painterly effect, nothing is to be compared to the Gothic window and the sky [...]. So it is, although less worthy, with Carus’s Gothic window, it does not create the desired effect because the artist’s aim is too manifest. While both artists allow taste to rein in their imagination, their extraordinary poetic sensibilities nevertheless grant us pleasures that in centuries to come will delight our grandchildren. [2] See Carl Gustav Carus, Zehn Briefe und Aufsätze über Landschaftsmalerei mit zwölf Beilagen und einem Brief von Goethe als Einleitung, 1815-35, Leipzig and Weimar 1982. [3]- The Ruins of Eldena Abbey near Greifswald, oil on canvas, 20.7 x 27.9 cm, signed and dated lower right Carus 1823, Klassik Stiftung, Weimar Museums (Goethe Haus), inv. no. GGE/00443. Gift from Carus to Goethe, fig. 2.

- Prause lists a replica titled The Ruins of Eldena by Moonlight, 22 x 14 cm, [...] a cottage with two lighted windows, a side view [...]; formerly in the Grosell Collection, Copenhagen; probably in the possession of Kunsthandlung Rusch, Dresden, around 1932 and later (Prause 1968, no. 64).