Fishing Boat on the Baltic Shore near Swinemünde, c.1834

This drawing is accompanied by an expert report from Dr. Iris Berndt, Potsdam, dated April 20, 2018.

The solitary form of a small fishing boat stands out against a flat, sandy shoreline. Blechen has made the boat the central motif of the sketch. The outlines of the calm sea and stretch of beach in the left background where fishing nets have been left to dry are lightly traced and only rudimentarily indicated. By contrast, he accentuates the small boat using hatched modelling and assertive pencil lines that give salience to its contours. The sheet immediately suggests parallels with the seashore images of Caspar David Friedrich, even though Blechen’s interest lies in mastering the psychological rather than the metaphysical experience of nature.

This sheet is one of a group of eighteen pencil sketches that Blechen very probably executed on his journey to the Baltic coast in 1834. Autograph inscriptions on a number of the sheets indicate that he visited Stettin, Stralsund, Swinemünde and Jasmund, a peninsula to the northeast of the island of Rügen. It is highly likely that the present sheet was made at the same time as a pencil sketch inscribed Swinemünde4 depicting a similar motif. In her report, the art historian Iris Berndt notes: A more detailed comparison of the sheets reveals that four boats were beached side by side at the water’s edge, with a fifth [the subject of the present sketch] a short distance away. In making the present sketch Blechen therefore had to adjust his viewpoint by a few meters. Two of the sheets have the same format as the present drawing. 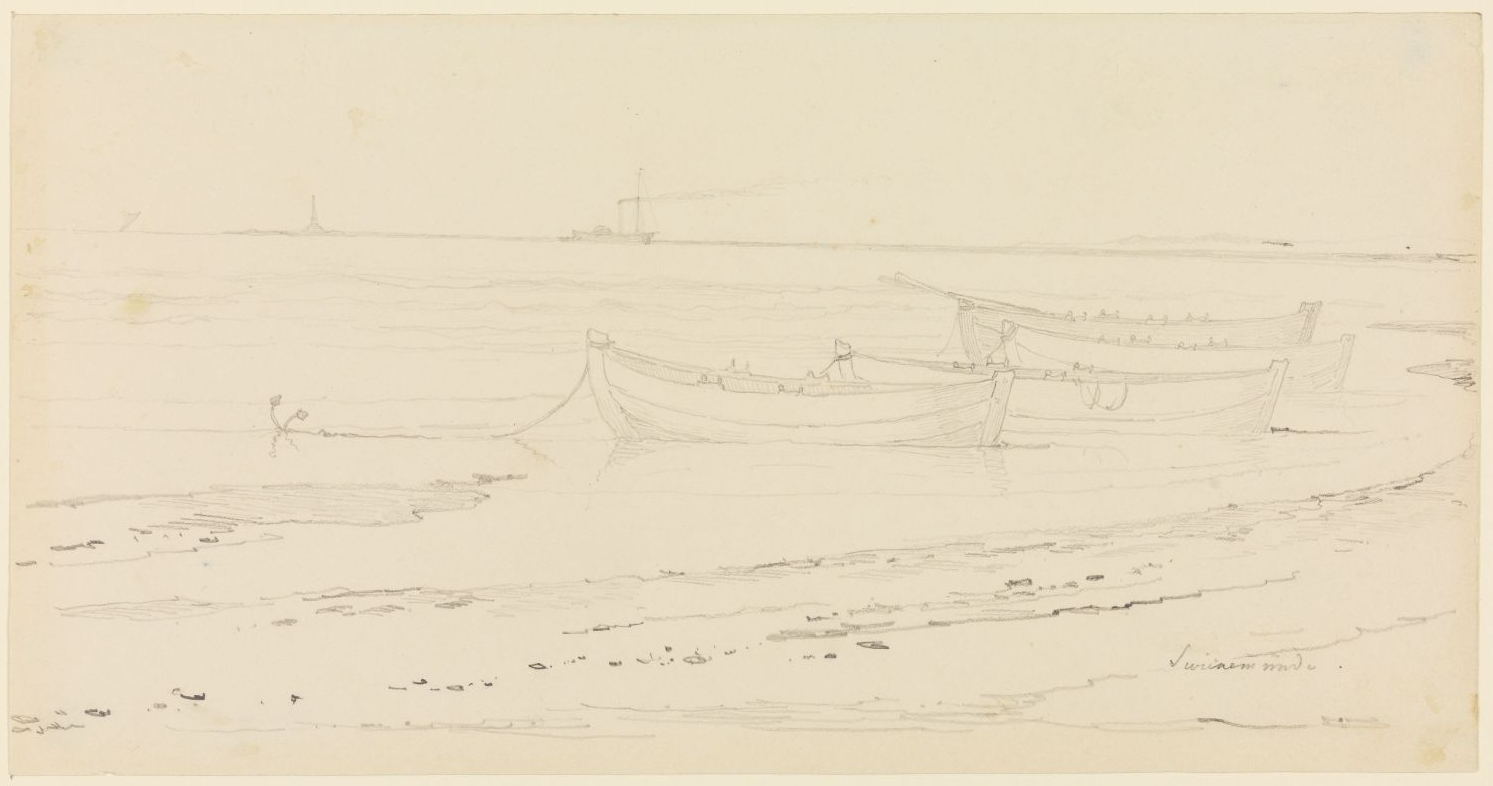 Guido Joseph Kern, in his 1911 biography of Blechen, assumes incorrectly that Blechen visited the Baltic coast in 1828. Recent research findings indicate, however, that Blechen’s visit very probably took place in 1834 when he was accompanied by Heinrich Gätke (1814-97). Gätke studied at the Berlin Academy of Arts under Blechen from 1833 to 1835. He went on to specialize in seascapes, working on the island of Heligoland where he settled in 1841.

The present sheet is clearly dateable to the latter part of Blechen’s short career.5 In June 1834 he had completed Friedrich Wilhelm III’s commission for views of the interior of the Palm House, an exotic pleasure building designed by Karl Friedrich Schinkel and situated on the Pfaueninsel near Potsdam. He was then free to travel north between semesters. At around this time, signs and symptoms of severe depression and approaching insanity multiplied, gravely impacting his artistic output. He was obliged to resign from his professorial post at the Academy.6

This drawing has a distinguished provenance. It was at one time in the most important of all collections of Blechen’s works, namely the collection formed by the Berlin banker H. F. W. Brose. Brose acquired the sheet in 1853 at an auction of part of the Blechen estate. Theodor Fontane, writing in 1882 on the Brose collection, mentions the presence of some seventy oil paintings and seven large-format portfolios of drawings. This sheet was probably sold some time before 1928 since it does not figure in the catalog of the Carl Brose collection sale published by auctioneers Hollstein & Puppel when they dispersed the collection at auction on 8-10 November 1928 in Berlin.