Provenance:
By descent in the family of the artist until 2017;
Michael Ripps LTD, USA.

There is an indisputable appeal to this deftly conceived self-portrait by the twenty-four-year-old artist Antoon Molkenboer. With his stiff, winged collar and pince-nez he presents a dapper, self-assured figure in his studio at Number 288, Ceintuurbaan in Amsterdam. In a portrait photograph of him (Fig.1) taken some nine years later his facial features are easily recognizable – the contrast with the intense self-observation and immediacy of the present self-portrait is striking. 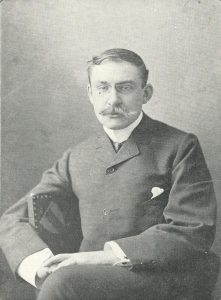 In the 1880s, a radical group of young writers known as the ‘Tachtigers’ (Eightiers) or ‘Movement of Eighty’, changed the cultural climate in Amsterdam. They rejected the conservative literary style of Dutch nineteenth-century Romanticism and found their inspiration in the work of French Naturalist writers and Impressionist painters. In the last quarter of the nineteenth century many Amsterdam painters were associated with or influenced by the Tachtigers and explored the opportunities of Impressionism.

Molkenboer depicts himself as an intense, assertive young painter. His modern style of self-depiction breaks with the Romantic tradition and his approach is realistic rather than impressionistic. It prefigures that of Realist painters such as Charley Toorop and Dik Ket, leading representatives of Dutch Neue Sachlichkeit in the first quarter of the twentieth century.

This compelling, aesthetically nuanced self-portrait might reasonably be seen as the young Molkenboer’s ‘calling card’ to the Amsterdam art market. It has a close association with the self-portrait that his elder sibling Theo, himself an accomplished painter, made in the same year.

Antoon Molkenboer was born into a family of artists in 1872. His father was the sculptor Willem Molkenboer, his brother the painter Theo Molkenboer and his sister the ceramist and furniture designer Phemia Molkenboer. Antoon was trained by his maternal uncle, the respected painter, draftsman and glass painter Antoon Derkinderen, after whom he was probably named. Derkinderen was a good friend of the noted Dutch painters Jan Toorop and Jan Veth.

Antoon Molkenboer received his formal training in drawing at the Rijksnormaalschool voor Tekenonderwijzers in Amsterdam, a school founded by his father, from 1889 to 1892. The school was housed in one of the wings of the Rijksmuseum. Molkenboer’s talent was not limited to drawing and painting – he also produced mosaics, graphics and stage designs. He was a member of the Amsterdam Wagner Society and designed the costumes and stage sets for all the Society’s Wagner performances between 1900 and 1904. Through his involvement in the Wagner Society he befriended the legendary Italian tenor Enrico Caruso who invited him to visit the United States. Molkenboer worked there from 1905 to 1910, initially furthering his studies at the Art Students League in New York. Through the intermediary of the painter Jozef Israëls (1824-1911), he was commissioned to record in paint the massive destruction caused by the 1906 earthquake in San Francisco which had rendered half of the city’s population homeless. Among other important commissions were the decoration of Asher Hamburger’s Majestic Theatre in Los Angeles 1908 (destroyed in 1933) and the decoration of the Seattle Chamber of Commerce.

On his return to the Netherlands in 1910, Molkenboer and his wife settled in The Hague, where he was to live and work in the following decades. When his house was destroyed during the German occupation, he settled in the comparatively quiet hamlet of Heemstede near Haarlem. An important later commission was the remarkable decorative scheme for the interior of the Antonius Abt Church in The Hague, with its stained glass windows and colorful mosaics – one of the mosaics being the largest north of the Alps.1