The Bay of Naples, Seen from the Slopes of Monte Epomeo,
Ischia, before 1830

Long neglected by art critics, André Giroux is today accepted as an important member of the generation of early nineteenth-century landscapists who engineered the transition from neoclassically composed landscapes to a more naturalistic style. Giroux’s chief interest focused on the natural world, albeit a natural world cultivated by man. He found a wide range of subjects in regions of Italy which had been populated since pre-Roman times. In his later career he produced pioneering work as a photographer.1

Giroux enrolled at the École des Beaux-Arts in Paris in 1821. He was awarded the Prix de Rome in the category Paysage historique for a painting titled La Chasse de Méléagre in 1825. The prize took the form of a bursary to study at the Villa Medici in Rome. His stay in Rome coincides with Jean-Baptiste-Camille Corot's first visit to Italy. There is no documentary evidence of personal contact between the two.2 However, given that both artists moved in the same circles, it is hardly likely that they would not have met. Their choices of motif were similar and their work displayed many stylistic and technical parallels. Giroux struck up friendships with Jacques-Raymond Brascassat, Théodore Caruelle d'Aligny, Edouard Bertin and Léon Fleury. The five went on painting excursions together in and around Rome and its environs. Giroux built up a large body of drawings and plein-air studies on his travels in the Campagna Romana, Umbria, Calabria and the region around Naples.

The present oil study was executed by Giroux some time before 1830 on a visit to Ischia. That the study unequivocally predates 1830 is evidenced by the existence of a copy3 dated 1830 made by the painter Guillaume Bodinier (1795-1872). Also painted on canvas, Bodinier’s version omits Giroux’s staffage figures. Bodinier arrived in Rome in 1822, where he met Corot. He is known to have accompanied Corot and a group of fellow artists on a study trip to the south of Italy in the mid-1820s.4 He produced a number of copies after landscapes by Corot during this period.5 It is highly likely that Giroux also joined the group traveling with Corot and visited Ischia with him. Corot’s own plein-air sketch titled View from the Slopes of Monte Epomeo, Ischia was executed in 1828. The work is now in the collection of the Musée du Louvre.6

Giroux has selected a viewpoint on a stretch of open road on the slopes of Monte Epomeo looking towards the Gulf of Naples. At the left, the road appears to zig-zag along a ridge above the valley between buttressed, partly galleried walls. Below, to the right, are the block-like shapes of single buildings. Points of light on their whitewashed facades contrast with the lush green woodland that surrounds them. An artist – probably one of Giroux’s fellow travelers – is perched on the edge of a stonework border at the side of the road. He is evidently so absorbed in sketching the landscape that he is oblivious to the inquisitive stare of the countrywoman standing beside him. 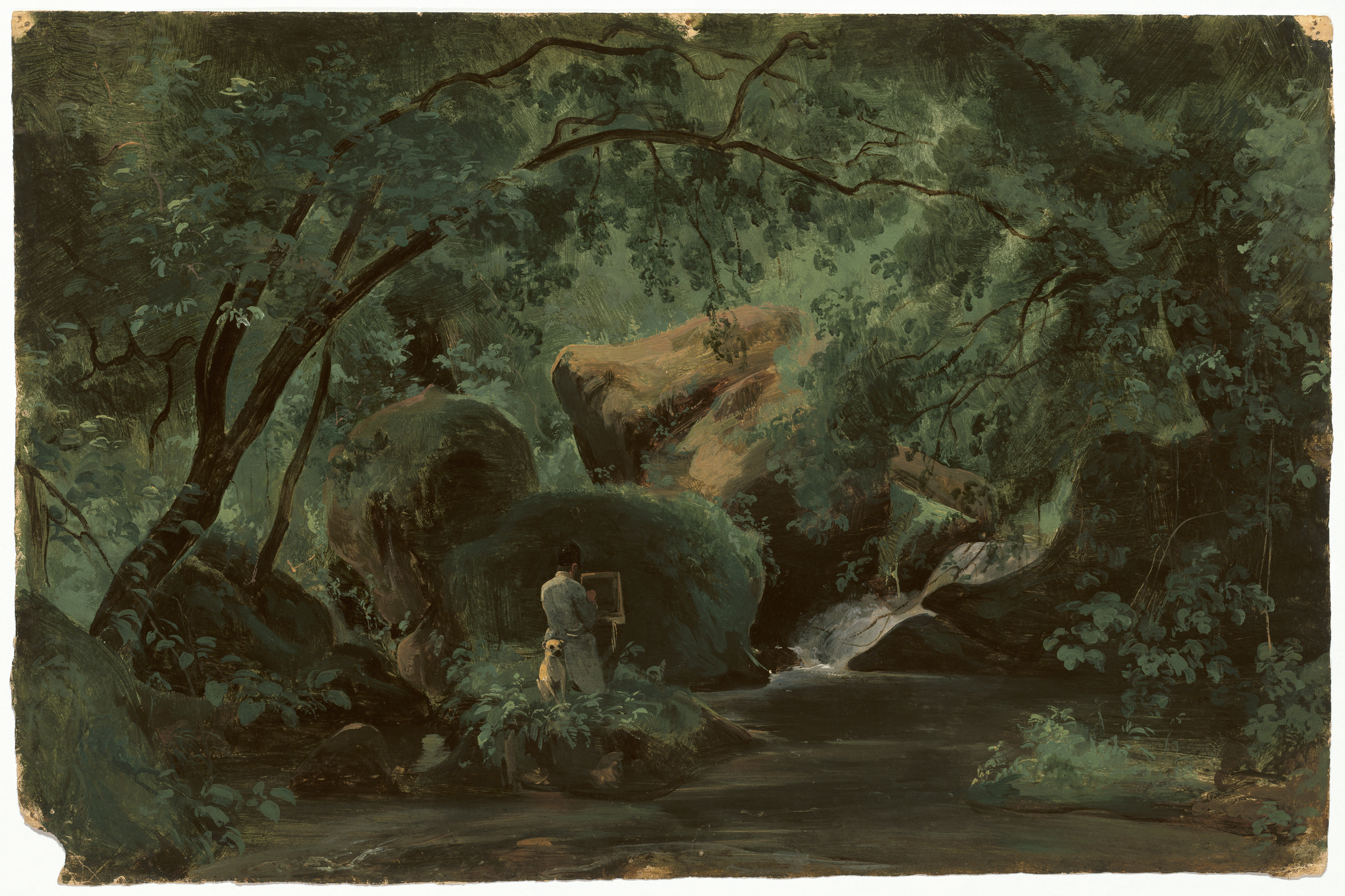 Experts continue to speculate over the identity of the figure seen from behind in Giroux’s oil sketch titled Painter Working in a Forest Glade (Fig. 1) – and over whether the painter depicted might be Corot. Executed in 1825-30, the sketch is now in the National Gallery of Art, Washington D.C.7

Returning to Paris in 1830, Giroux submitted an Italian landscape at the Paris Salon and won the first prize. His interest then turned to the landscapes of the Paris basin. He produced a large number of views of Fontainebleau, went on painting excursions to Normandy and also worked in Grenoble. Study trips took him to Switzerland and Austria. He participated in exhibitions at the Musée du Luxembourg and the Grand Palais in Paris and also showed work in Berlin in 1836 and 1844.8 After an early debut at the Paris Salon at the age of eighteen he remained a regular contributor until 1874.9