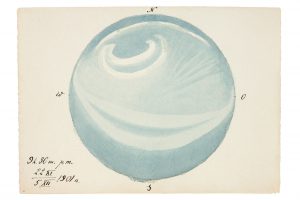 The Aurora borealis has fascinated mankind since antiquity. In ancient times it was read as a celestial sign around which countless myths, sagas and legends came to be woven. A fiery, bleeding sky was interpreted as a harbinger of war, affliction or famine. Not until the Enlightenment was the Aurora borealis – the Northern Lights – perceived as a scientifically explicable phenomenon.[1]

The era of the great Arctic expeditions began at the end of the nineteenth century. These expeditions were not only motivated by a colonialist urge but driven by scientific curiosity. At the same time, Russia also began to research its northernmost regions. In the summer of 1900, Baron Eduard von Toll, a Russian geologist and Arctic explorer, set off on a sea voyage, heading a two-year scientific expedition. In the summer of 1902, he traveled by sledge and kayak to Bennett Island, never to be seen again[2] and is presumed to have died on an attempt to go south. He was not the only important scientific researcher to have taken part in the expedition. Other researchers who traveled with him were Alexander Kolchak[3] and Alexei Bialinizki-Birula (Fig. 1), the author of the present group of watercolors. Although Bialinizki-Birula was a zoologist, he also nurtured a strong interest in natural phenomena like the Aurora borealis. He described his sighting of the spectacular light display in a letter to the secretary of the expedition commission, Valentin Bianki: Between eight and nine o’clock in the evening, if the sky is clear, one can see the Northern Lights, one evening they looked particularly beautiful, like a rippling curtain.[4] The letter bears two different dates – the Julian date, 30 September 1900, and the Gregorian date, 13 October 1900. Both the Julian calendar and the Gregorian calendar were in regular use at the time. 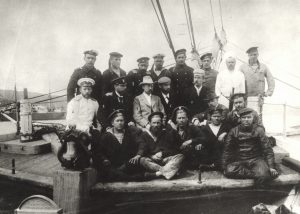 It is precisely these observations that Bialinizki-Birula has recorded in the present watercolors – snapshot-like impressions captured in the extreme weather conditions of the Far North. Although photographs were taken on the expedition, none were taken of the Aurora borealis. There were reasons for this. Photographic materials were in very short supply and there would have been no capacity for wastage. In addition, exposure time would have been too long.[5] In 1901, the sole available option for documenting the many different forms of the Aurora was to record them in watercolor on paper, as Bialinizki-Birula has painstakingly done, working in huts and shelters heated only with extreme difficulty.

He described expedition life and work in a letter to Richard Schmidt, the librarian at the Zoological Museum in St. Petersburg. The food, which they were compelled to eat off dirty crockery, immediately froze solid at temperatures below 55°C. The dog sledges only transported provisions and equipment. Members of the expedition had to run behind the sledges and often had to carry baggage.

In the present watercolors Bialinizki-Birula restricts his palette to shades of blue which he models with great dexterity. He employs delicate, finely differentiated gradations of color to define the sea, the sky and the Aurora. His annotations provide a meticulous record of when he made the drawings – at night and at dawn. In addition, the drawings are doubly dated, including both the Julian and Gregorian dates.

Most of the time, the expedition explored the region on the ship Zarya [lit: red sky glow at dawn or sunrise]. But when weather conditions deteriorated the ship became ice-bound and the expedition’s progress was halted for the winter. The present watercolors were executed at some stage during the expedition’s second winter on Kotelny Island.[6] The research findings collected on the expedition were extensive, covering not only the fields of zoology, meteorology and oceanography but also contributing significantly to scientific understanding of the Aurora borealis. The evaluation and publication of the expedition’s research results would take decades to finalize.[7]

This group of watercolors by Alexei Bialinizki-Birula eludes classification purely as scientific documentation of the Russian Arctic expedition. Rather, the pleasure derived from looking at them is a timeless aesthetic experience.

[3] Alexander Kolchak (1874-1920) was a scientist and admiral in the Imperial Russian Navy. For over a year during the Russian Civil War he was the internationally recognized ‘Supreme Governor of Russia’. He also fought against the Red Army. See Pavel Zirianov, Admiral Koltschak, oberster Regent Russlands, Moscow 2006, p. 87.

[6] Information kindly supplied by Maria Dukalskaja, Deputy Director of the Russian State Museum of the Arctic and Antarctic.