This plein-air oil study is one of a group of studies and sketches after similar motifs executed by Calame in the years 1857-61. He was especially interested in depicting the play of light and shadow and identifying the shifts in tone and colour when sunlight illuminated the rough surfaces of rocks and boulders. Here, the boulders lie as they had fallen, on the shore of a lake at the foot of a high, eroding cliff. In terms of composition and subject this study bears close comparison with an oil study painted by Calame in the same period. This was almost certainly executed on the same shoreline but from a different viewpoint (Fig. 1).[1] 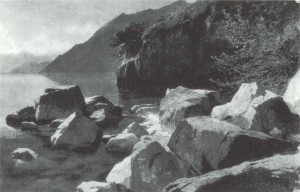 The fall of light on the surface of the boulders is skilfully modelled and contrasts starkly with areas of shadow which emphasize the structure and colouristic variety of the rock. Some of the boulders have patches of moss, lichen or scrub. Their striking shapes are reflected in the clear water of the lake. They stand out against the green of the middle ground and the schematically depicted distant shoreline which appears to be veiled in a misty haze. The study conveys a compellingly accurate plein-air impression of the atmospheric effects and glare of light experienced when clouds build up, presaging a storm.

The mountains and lakes of Switzerland were Calame’s preferred motifs. He explored vast tracts of the mountains on foot in search of the best views of unspoiled nature. He was often accompanied on his trips by pupils, among them the Lucerne painter Robert Zünd. Later, failing health compelled Calame to restrict his walking to less demanding routes and to choose motifs at lower altitudes.

Calame never intended to offer his oil sketches for sale but kept them as models to serve as the basis for large-format studio paintings. Most of them remained in his studio until his death. They did not appear on the market in any great number until his estate was dispersed at auction in Paris in 1865. Present-day collectors are attracted by their extraordinary virtuosity and topographical exactitude. The sketches convey a compellingly accurate impression of the atmospheric effects and the quality of light experienced before the motif. Calame’s determination to achieve a high degree of realism in his oil sketches was fundamental to the completion of the magisterial studio landscapes.[2]

Calame began his career as an employee of a banker named Diodati. It was Diodati who enabled him to take up painting in 1829, financing his studies under the landscape painter François Diday. Calame spent free moments colouring Swiss views which he sold to tourists. He began to exhibit regularly in Geneva, Berlin and Leipzig in 1835 and after 1839 was a regular contributor to the Paris Salon. Public recognition was widespread, particularly in France and Germany. He visited Rome and Naples in 1844 where he experienced the vibrancy of Mediterranean light at first hand.

In the 1840s, Calame was ranked as one of Switzerland’s leading landscape painters in the company of such names as his teacher François Diday and Wolfgang-Adam Töpffer. He received numerous awards during his lifetime. Today he is regarded as one of the major representatives of the Swiss Romantic heroic tradition in landscape and alpine painting.[3]

[3] An exhibition of works from the private collection of Asbjorn Lunde was staged at the National Gallery in London in 2011. It featured a large group of paintings by Calame shown in juxtaposition to works by major Northern European painters. The exhibition convincingly demonstrated Calame’s signal importance in early 19th-century European landscape painting. See Forests, Rocks, Torrents; Norwegian and Swiss Landscape Paintings from the Lunde Collection, exhib. cat., London, National Gallery, 2011.