The study is registered in the archives of the Schweizer Institut für Kunstwissenschaft [SIK] in Zurich as an original work by Albert Anker (no. 141210 0002); year of registration 2015.

Albert Anker’s native village of Ins and the surrounding Bernese countryside with its largely Protestant population greatly influenced his work. His œuvre, in turn, was to shape the popular image of life in rural Switzerland for future generations. Romanticized anecdote and sentimentality are absent from his work and his favourite subjects – children at play and at school, reading, knitting, weaving and doing homework – are those attractive to a social reformer who spoke out against child labour and championed the setting-up of a national education system.

Anker deploys an extreme form of realism and scrupulous attention to detail in his depictions of everyday scenes, most of which are set in domestic interiors. He produced oil studies of interior spaces and he also attached great importance to the precise portrayal of furnishings and individual objects in an interior. His handling of paint produced virtuoso, meticulously precise results in the rendering of textures and surfaces.[1]

The tiled stove[2] was traditionally the focus of home life, particularly in winter. It is thus unsurprising that a tiled stove should figure in so many of Anker’s interiors. It is sometimes placed in the background and at other times it is the chief subject of the painting – the figures engage in their daily routine around it. The present oil study depicts the tiled seat and back wall of a stove that has seen better days. The depiction of the chipped edges and cracks in the large green tiles and in the filigree blue design of the smaller white tiles is masterly. The compressed format, close-up view and unusual perspective have a powerful immediacy. The handling of paint is fluid and the palette subtly balanced.

The tiled stove depicted in this study is identical with the stove depicted in an oil titled Two Sisters (Fig. 1) executed in 1883.[3] The break in the row of green tiles, the grouting, the number of tiles in each row and their colour are exactly the same in this oil study as they are in the oil painting. According to Anker’s Livre de Vente the stove belonged to a Jakob Zöllner.[4] 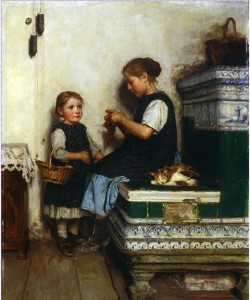 Anker[5] ranks as the leading Swiss Realist of the second half of the nineteenth century. He took up painting in 1854 after taking his first private lessons in drawing and abandoning his studies in theology. In the autumn of 1854 he moved to Paris to study under Charles Gleyre, a Swiss classicist painter. He was also a student at the Ecole des Beaux-Arts from 1855 to 1860. He exhibited regularly at the Paris Salon. He signed a sales agreement with Alphonse Goupil, a prominent Paris art dealer, and won the Salon’s gold medal in 1866. He divided his time between Paris, where he spent the winter months, and Ins, where he spent his summers. He settled permanently in Ins/Neuchâtel in 1890. He was a member of the Grand Council in Bern in the years 1870-4, co-organizer of the Swiss contribution to the Paris World’s Fair in 1878 and a member of the Swiss Federal Art Commission.

[1] Martin Stuber, Gerrendina Gerber-Visser and Isabelle Messerli (eds.), ‘Ländliche Gesellschaft und materielle Kultur bei Albert Anker (1831-1910)’, in Berner Zeitschrift für Geschichte (BEZG), Sonderdruck, in Kooperation mit dem Kunstmuseum Bern und der Stiftung Albert Anker-Haus Ins, 72/2, 2010, pp. 6-10. [2] Anker also decorated and produced faience objects. Between 1866 and 1892 he worked in the faience factory of the ceramicist Théodore Deck. This body of work consists of approximately 500 hand-painted decorative plates and tiles. Many of their motifs are thematically related to his oil paintings. [3] The present oil study is dated 10 years later than the oil painting. There are two possible explanations for this: either, that Anker returned to this stove on many occasions, making studies even after completion of the oil painting or, that he may have added a date to the study later – he used different brushes to inscribe the day/month and the year. This would imply that the date 1894 is incorrect. Anker rarely signed and dated his oil studies. [4] [...] les 2 soeurs avec le fourneau de Zöllner Jakob [...]. Sandor Kuthy and Therese Bhattacharya-Stettler, Albert Anker, Basel and Bern 1995, p. 160, no. 304. [5] Albert Anker. Schöne Welt. Zum 100. Todestag, exhib. cat., Kunstmuseum Bern and Winterthur, Museum Oskar Reinhart am Stadtgarten, Bern 2010.