The Smoker and the Shrimp Seller

The Golden Age of seventeenth-century Dutch painting went hand in hand with rapid economic expansion, coupled with growing scientific advancement. The Smoker and the Shrimp Seller was painted in Leiden, then the second largest city in Holland and an important center of trade, textile manufacturing, science and the arts.

The present oil is ostensibly a genre painting depicting an everyday scene and drawing on close observation of the visible world, but it is discreetly allegorical in its narrative. A wealthy young man sits in the garden of a villa smoking a pipe and enjoying a glass of wine. He is evidently searching in his pocket for money to pay an elderly shrimp seller. The painter’s meticulous depiction of fabrics and surfaces immediately catches the viewer’s eye and the highly finished techniques leave no doubt as to his artistic skills. But the painting also contains a disguised moral message – an invitation to the educated contemporary viewer to interpret a number of carefully placed clues among the familiar, realistically depicted everyday objects on the table. This deployment of ‘apparent realism’, combined with moralistic intent, is very characteristic of Dutch Golden Age painting.

The figure of the young man, possibly a student, can be seen as an allegory of the biblical prodigal son – wasting his inheritance on a dissolute, pleasure-loving lifestyle. The shrimps the elderly man is about to sell him will purportedly improve his virility, the long pipe has a phallic implication and the wineglass, a roemer, is associated with intemperance.2 Connotations like these needed little interpretation to Dutch seventeenth-century viewers accustomed to the comforts of affluence. References such as these greatly contributed to the popularity of genre painting in the Puritan moral climate of the Dutch Golden Age.

The whereabouts of the present painting was unknown for decades. On the basis of a black-and-white photograph taken in 1894 it was long considered to be a work by Frans van Mieris the Elder. Recent cleaning has revealed Jan van Mieris’s signature. The work is an important addition to his small oeuvre – no more than forty paintings are known.

It has always been difficult to distinguish Frans van Mieris’s late work from the work of his two sons Jan and Willem. Trained in their father’s workshop, they used the same painting techniques. They often repeated their father’s compositions and completed his unfinished paintings after they inherited his workshop.3

Frans van Mieris developed a repertoire of compositional elements that proved to be highly successful on the art market of his day. He also inspired the next generation of painters, particularly his two sons. In The Smoker and The Shrimp Seller Jan van Mieris skillfully blends his own compositional ideas with those of his father (Fig. 1). 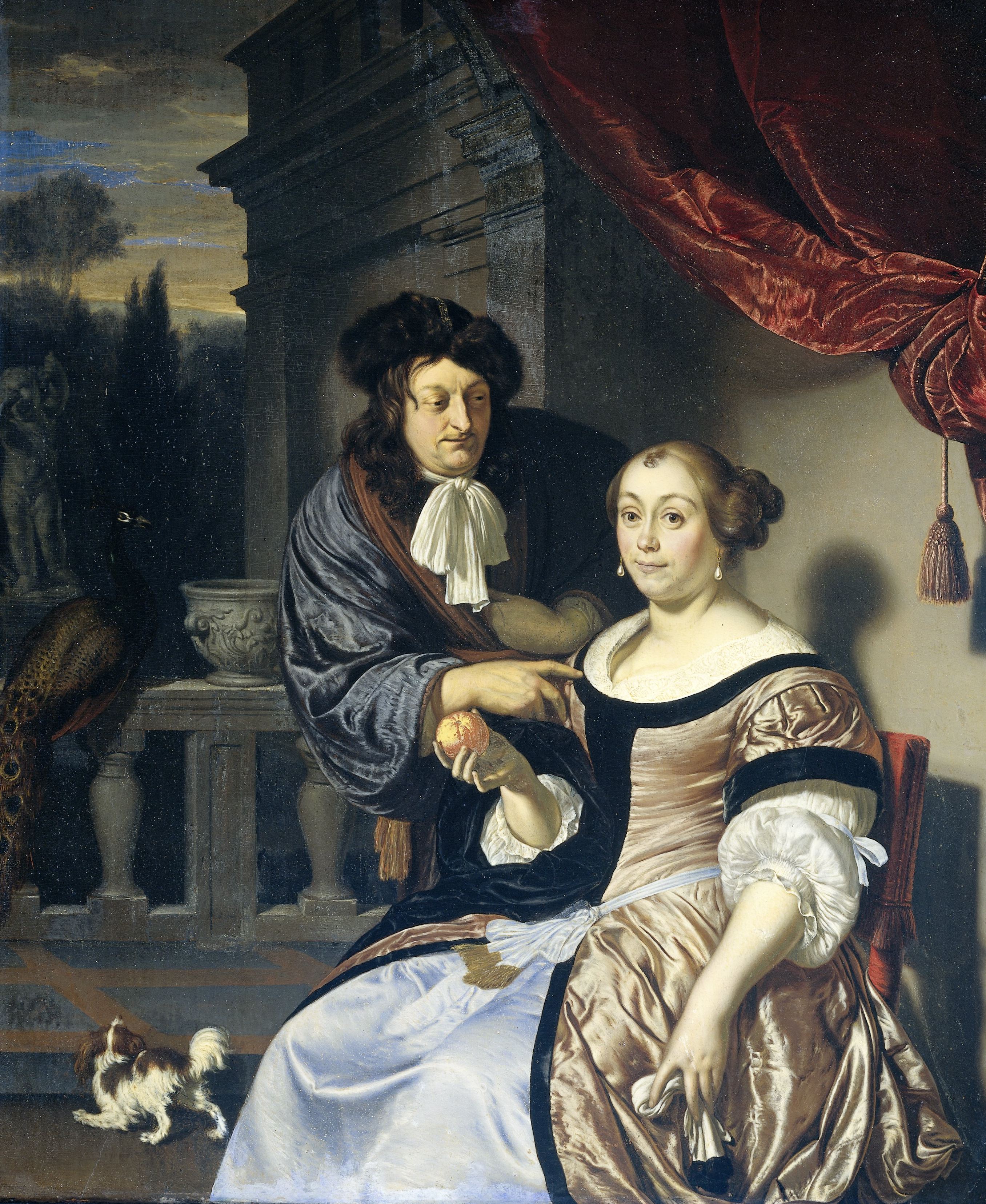 Jan, Frans and Willem van Mieris were among the most successful painters of the Leiden school of fijnschilders [fine painters]. The school was highly regarded for its meticulous, highly finished techniques and striking realism, especially in the depiction of fabrics. The application of paint in multiple, fine layers created a surface of almost enameled smoothness. This came into fullest effect on durable, smooth surfaces such as wood panels and copper plates. These were widely commercially available and therefore commonly used. The technique was time-consuming and therefore costly, which might explain the general preference for small formats. These cabinet paintings were highly valued not only within the new bourgeoisie but also among prominent collectors such as Frederick Augustus I, Elector of Saxony (1670-1733) in Dresden and Cosimo III de’ Medici, Grand Duke of Tuscany (1642-1723) in Florence.4

We would like to thank Otto Naumann for confirming the attribution to Jan van Mieris after examining the painting. It will be included in the forthcoming Jan van Mieris catalogue raisonné.

1 Marianne Hochuli (née Mariana Balazs) was born in Budapest, Hungary in 1922. She came from a family of art collectors and developed an early interest in art. She escaped from Budapest in 1944, with the Germans on one side of the city and the Russians on the other. She made her way by train to Paris. From France she sailed to London to reunite with her first husband. After some time in London and by then divorced, she moved to Berlin and worked for Radio Free Europe. She also worked for the US Forces as an interpreter - she spoke Hungarian, German, French and English. She intended to move to the United States, but eventually went to Brazil in 1952. She lived in Brazil for over 35 years, where she met her second husband, a Swiss-born hotel manager named Fred Hochuli. She was widowed in her mid forties and she moved to Houston, Texas in the 1990s. See <https://www.legacy.com/obituaries/HoustonChronicle/obituary.aspx?page=lifestory&pid=188605075> (accessed January 7, 2019).

2 We are grateful to Dr. Eddy Schavemakers for explaining the meaning of the visual metaphors in the painting