Oil on canvas, 23.5 x 38.3 cm
Signed and dated lower left Morbelli. 1907.
Label of the Galleria d'Arte Fogliato di Torino on the back
Certificate of authenticity issued by Rolando Morbelli, the artist’s son

Angelo Morbelli is, together with Giovanni Segantini, Guiseppe Pellizza, Gaetano Previati, Emilio Longoni and the critic and gallery owner Vittore Grubicy, one of the six most important figures of Divisionism1, a movement that flourished in northern Italy at the same time as Pointillism in France. The term describes a painting technique whereby separate strokes of different colors, placed next to one another, blend in the eye of the observer into a single hue.

When Divisionism arose, Italian artists had little or no first-hand experience of original works by Neo-Impressionists such as George Seurat, whom they knew mainly from magazines – L’Art moderne, for example – which published articles by the art critic Félix Fénéon, who coined the term Neo-Impressionism. Around 1887, Fénéon’s ideas were seized upon by the critic, gallery owner and painter Vittore Grubicy, who propagated Divisionism in Italy and supported it as a patron. The exhibition of works by Morbelli, Longoni and Segantini at the Brera Triennale in Milan in 1891 first brought the new movement to the attention of a wider public.

The divisionist revolt was not only about a new painting technique, however. By showcasing social issues, it opened up a whole new world of subject matter.2 At the turn of the century, Symbolism sparked the interest of Divisionists in landscape as an autonomous motif.

Angelo Morbelli – the author of the present painting – studied at the Brera Academy in Milan until 1876. Under contract to the Grubicy gallery since 1887, Morbelli visited the world exhibition in Paris in 1889 and subsequently spent a short time in London. In the following years, he devoted a great deal of time to developing the color theories that were foundational to Divisionism. In addition to exploring the new painting technique, he was particularly interested in painting materials and experimented with manufacturing home-made oil paints and varnishes in order to achieve the desired light effects.

Morbelli was the ‘most rigorous and most engaged champion of the new technique’.3 The focus of his later work was the landscape, particularly the mountainous landscapes of northern and central Italy. Starting in 1895, he usually spent the summer months in Santa Caterina Valfurva in Lombardy. He was interested in the ever-changing perception of colors, depending on the weather and the time of day, which is what induced him to paint a number of versions of a motif at different times of the day and under various atmospheric conditions.4

Our painting, dated 1907, is captivating not only because of its mood but also because of the ingenious technique. The delicate dashes of color were meticulously applied in pastose brushstrokes that form a fine meshwork. The contours are soft and the play of color and gradations of light highly subtle.5

The canvas depicts a mountain landscape at dusk. The foremost mountains, parallel to the picture plane, are almost shrouded in darkness – only a bit of color is still recognizable. Morbelli lets us imagine them through layers of dark glaze.

The mountain ridge that runs into the depths of the scene reflects the soft light still remaining in the sky and bathes the side of the mountain in a warm reddish glow. The contrast between the dark foreground and the bright middle distance lends the picture its magical illusion of depth.

The work in smaller format6 (fig. 1) can be considered a nature study made preparatoryto our painting. 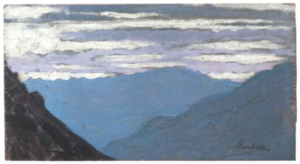 2 Worth of mention are the political, social and economic changes brought about by the unification of Italy in 1861 and by the industrialization taking place throughout Europe in the 1890s.

5 The Divisionists differ from one another not only in the originality of their subjects but also in their manner of painting: the thinnest of lines, dots and brushstrokes alternate in the work of Pellizza, whereas Previati’s decorative allegories display flowing, organic lines, and Morbelli employs parallel hatching.