View of Skjolden in Lyster, Norway, 1843

After Dahl left Norway in 1811, recollections of his native country still lingered in his mind. He went on to paint idealized images of the Norwegian landscape in Copenhagen, Dresden, and even in Rome. He first returned to his home town of Bergen in 1826, traveling from Dresden to Oslo and then across the mountains of southern Norway. He made a large number of studies of nature on the journey – mainly pencil-and-wash drawings and watercolors – which provided him with a rich stock of motifs. He would draw on this pool of motifs for the rest of his life in the many Norwegian landscapes he went on to produce. They crystallize what might be described as the ‘essence’ of his native country – majestic mountain ranges, inaccessible gorges, cascading waterfalls, dense, inhospitable forests, isolated mountain huts and traditional farmhouses. He was later to make four further visits to Norway – in 1834, 1839, 1844 and 1850 – to replenish his stock of motifs.

He broke the journey to Bergen in 1826 to spend time in southern Norway. He stayed at the Munthehuset [the Munthe Villa] in Kroken on the Lusterfjord. His host, a Kaptein Munthe, introduced him to the painter Thomas Fearnley, a fellow countryman. When Fearnley was later in Dresden he was briefly a pupil of Dahl. In August 1826, they made an excursion to Fegum, Skjolden and Fortun together, reaching the head of the Lusterfjord at Skjolden on August 8. A traveling companion, Kaptein Johannes Eckhoff, commented that the journey was immediately resumed the following day – ‘after our painters had completed a number of landscapes’. Dahl’s first view of Skjolden bears the date 9. August 1826. It is now in the Nasjonalgalleriet in Oslo (Fig. 1, inv. 3721, Bang no. 530).

The present version of the landscape was made in 1843. It is a reworked, idealized version of the composition that Dahl completed in 1826. Lighting is used to dramatic effect. At the right, where the steep diagonals of a mountain slope and a more distant range meet, the eye is led towards a side valley, a traditional recessional device. A towering mountain range acts as a backdrop. Dahl has placed a tall birch – his favorite tree – at the center of the image. The foreground and middle ground of the composition are very largely unchanged although elements such as the buildings, boats and tree trunks have been moved a little further into the foreground. 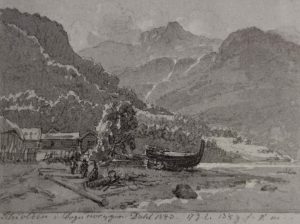 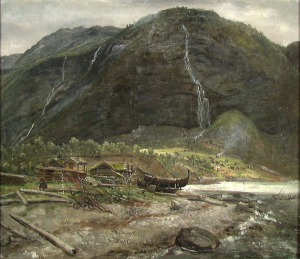 Until recently, the existence of this View of Skjolden in Lyster was only known through a Liber Veritatis drawing now in the collection of the Billedgalleri in Bergen (Fig. 2). The drawing formed part of Dahl’s Liber Veritatis, a drawn record of his paintings begun in the 1820s to document works he had parted with. He usually recorded the format of the painting and the name of its new owner.