Nicolette Sluijter-Seijffert has kindly confirmed the attribution after first-hand inspection of the work.

Cornelis van Poelenburch is now known primarily as a landscape painter. The present painting is an example why in his own time his figures were always the first to be mentioned and praised.1 He is also known to have added the staffage to paintings executed by other painters. Poelenburch’s small, highly refined paintings usually had a biblical or mythological subject, set within a landscape, and often with nude figures. His work combines a masterly control of the soft light of the Campagna, with the energetic figures, inspired by ancient sculptures and the artists of the Italian Renaissance. Although the work is slightly unusual, given the fact that he executed it with a monochrome palette, the technique and quality it contains demonstrate why van Poelenburch is generally considered the most important of the first generation of Dutch Italianate painters. It may have been inspired by van Sir Anthony van Dyck’s small-scale monochrome portraits in oil depicting noblemen, soldiers, scholars, art patrons and, in particular, portraits of fellow artists with the prospect of eventually engraving and publishing them, now known as the Iconography Series. Van Poelenburgh was familiar with these small monochrome paintings, as he himself posed for van Dyck, see fig. 1. 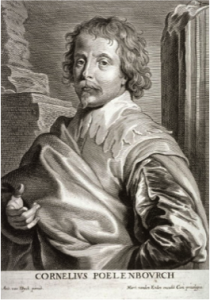 Van Poelenburch trained in Utrecht under Abraham Bloemaert, but it was his lengthy visit to Italy as a young man that was to have the most dramatic impact on his art. He was in Italy from 1617 to 1625, mostly in Rome, although between 1618 and 1621 he worked for Cosimo II de Medici, Grand Duke of Tuscany in Florence. During this period he was a.o. influenced by Adam Elsheimer and Paul Bril, fellow Northern artists whose time in Rome also transformed their work. Whilst in Rome he also became a founding member of the Bentvueghels or Schildersbent, a famous society of mostly Dutch and Flemish artists who were active in that city. Both courtly patrons and private collectors avidly sought after his religious and mythological scenes. In 1638 van Poelenburch was invited to England to work as a court artist for Charles I, in whose employ he remained for four years, which underlines van Poelenburch’s international success during his lifetime.2