Pieter Thys was one of the greatest artists ... it is only justice to put him with the first of his nation. He was a great designer; his compositions have much spirit; his colour & his manner are vigorous2.

All the impressive characteristics of Pieter Thys which the 18th century art historian Jean-Baptiste Descamps praised so enthusiastically are demonstrated in Daedalus and Icarus. It is one of the artist's masterpieces and he proudly signed it 'Pieter Thys fecit'. Although Thys was clearly indebted to van Dyck, his powerful and dramatic Daedalus and Icarus needs not to shy away from a comparison with his great Antwerp predecessor. Van Dyck painted the subject twice: Art Gallery of Ontario (fig. 2) and Rose-Marie and Eijk van Otterloo collection, Marblehead MA (fig. 1)3. Thys took the traditional theme to another level both in composition and in psychological profoundness. It even seems as if he has given a new, more contemporary interpretation of the story. Traditionally the fable's message is moderation and the golden mean, as Icarus was instructed by Daedalus not to fly too high, nor too low. But Icarus' powerful gesture in the present work, pointing energetically with his right hand raised high to the sky, fits perfectly well to a 1632 interpretation of Ovid's fable by George Sandy which seems to be influenced in part by Francis Bacon: "Icarus falls in aspiring. Yet more commendable than those, who creep on the earth like contemptible wormes, such the other extreame: whereas this hath somthing of magnamity, and mounts like a bird of Jove to his heavenly kindred. So that two vices, the one is the braver, and the other safer (...)"4. 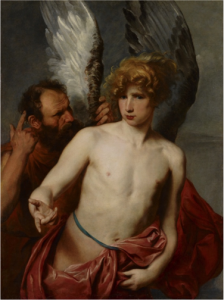 Pieter Thys' Icarus clearly favours the braver vice. He is prepared to fly too high and would rather die eagle-like than like a worm. Daedalus tries in vain to bring his high-flying son down to earth with his heavy right hand that at the same time attaches the wing. The father's sorrowful expression shows that he already senses the tragic end of the story. Pieter Thys transformed the psychological tension between father and son masterfully in a powerful grand composition. A recent cleaning revealed that the work is also extraordinary beautiful in colour. The vigorous palette of Pieter Thys seems to be influenced not only by Rubens and van Dyck but also by Venetian Renaissance paintings. Icarus' shimmery pink drapery, for example, is reminiscent of Titian and Paolo Veronese.

Although Pieter Thys worked for such illustrious clients as the Archduke Leopold William in Brussels and the House of Orange in The Hague, today he is not widely known. In part this may be explained by the fact that numerous of his compositions, including the present one, were in the past wrongly attributed to Anthony van Dyck. But beautiful and significant works such as our Daedalus and Icarus prove strikingly that Pieter Thys developed his own personal and very powerful style.

There is another autograph but unsigned version of Daedalus and Icarus in the collection of the Bayerische Staatsgemäldesammlungen, Munich, and an old copy at the Royal Museum, Antwerp.

In 1644-5 Pieter Thys became a master in Antwerp’s Guild of St Luke and from circa 1647 worked for Archduke Leopold William in Brussels and the House of Orange in The Hague. He executed allegorical and mythological compositions for both courts and was also active as a portrait painter (e.g. Archduke Leopold William, Vienna, Kunsthistorisches Museum). Later in his career Thys concentrated mainly on religious compositions for Antwerp monasteries and numerous churches in smaller towns and villages in Brabant and East Flanders (e.g. Sacrifice of Isaac, Antwerp, S. Jacob). In addition, he painted mythological scenes and portrait commissions for individuals and the art trade in Antwerp. From the outset Thys was greatly influenced by the later work of van Dyck. This may be related to the fact that his early patrons were rulers whose taste was formed by van Dyck’s refined courtly style. Other possible influences include the work of older painters such as Thomas Willeboirts Bosschaert (1614-54) and Gonzales Coques; both artists were among the earliest followers of van Dyck, and they were also Thys’ predecessors at the courts of Brussels and The Hague.