Interior with an Infant in a Cradle, 1890

Italy is too picturesque. Holland, by comparison, seems dull at first glance. We have yet to discover its secret charm. Its beauty lies in intimacy. As the country, so its countrymen: nothing loud, no affectation, no empty words.1 (Max Liebermann)

Max Liebermann lived for a number of years in Paris and also spent several years in Munich, but his true emotional and artistic engagement was with the Netherlands. He spent the summers there from 1874 until the outbreak of the First World War. In his sensitive account of the Netherlands, which he described as his Malheimat – particularly Holland, the coastal region – he paid tribute to what he called the ‘country of painting par excellence’. He got to know a large number of artists, such as August Allebé and his pupil Jan Veth,2 and members and associates of the Hague School of painting like Jozef and Isaac Israëls, Jacob and Willem Maris, Anton Mauve and Jan Toorop.

Although van Gogh and Liebermann – near contemporaries – never actually met, van Gogh is known to have expressed interest in Liebermann’s work and to have felt a strong rapport with Liebermann’s subject matter and palette. The simple settings and muted tones of the scenes of everyday life both artists depicted in the years 1880 to 1890 show astonishing parallels.3

Drawing his inspiration from his study of Dutch seventeenth-century masters like Jacob van Ruysdael, Meindert Hobbema and Pieter de Hooch,4 Liebermann produced paintings of artisans, peasants, orphaned girls and women at work. He empathized strongly with the poorest segment of the population, composed chiefly of fishermen and peasants, documenting its hard struggle for survival in a large body of paintings and drawings. His intense preoccupation with the theme of physical labor expressed in motifs such as artisans and peasants observed in Holland earned him a reputation as the ‘painter of poverty’. 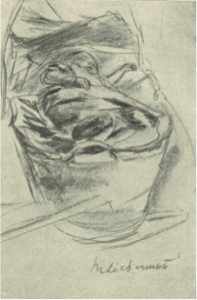 Interior with an Infant in a Cradle was painted in the summer of 1890 on an extended visit to Zandvoort, a Dutch fishing village on the North Sea coast. The painting shows a corner of the living room of a farmhouse or fisherman’s cottage. The warm light of a mild summer’s day enters the room through a large window. Net curtains filter the light, creating a diffuse effect which softens the shadows created by objects in the room and produces muted tones. Liebermann is known to have made a preliminary study in pencil of the motif at the left of the image, an infant sleeping in its cradle (Fig. 1).5 He explored the mother-and-child theme in a number of other drawings dating from this period.

Unusually for this period in Liebermann’s career, the support used for the present work is a wood panel. He has applied rapid, free-flowing strokes, using impasto in the foreground while some areas of the background have been left bare, revealing the pale ground. The striking confidence and precision of the brushwork bear witness to the tremendous energy and speed with which he executed the composition.

As a printmaker, Liebermann was clearly drawn to the motif, producing several versions of it. In 1890 he published an etching titled Infant in a Cradle (Schiefler 13). In 1917 a wood engraving by Reinhold Hoberg based on the present motif titled Corner with Cradle6 was published by the Fritz Heyder Verlag in an edition of seven hand-pulled proof impressions signed by both artists.

4 Many of Peter de Hooch’s paintings represent scenes set in the interiors of Dutch town houses. The depiction of light was his chief preoccupation. The Dutch Golden Age spanned the seventeenth century. It was the period when the Netherlands enjoyed its cultural, scientific and commercial heyday.