Lovis Corinth, his wife and their two children, Thomas and Wilhelmine, spent the summer of 1913 in South Tyrol. From June through August they stayed in the hamlet of St. Ulrich in Val Gardena where they had spent a summer vacation two years earlier. They took lodgings in a property named Villa Mondschein. A family photograph shows Corinth with his wife and two children while their domestic servants stand in the background (Fig.1). 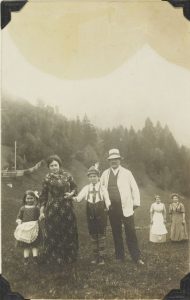 Corinth had not fully recovered from his debilitating stroke in December 1911. Its effects were so severe that he was barely able to paint in the months that followed.

The summer of 1913, however, saw him working on a number of paintings and he appears to have been relatively satisfied with his output. Writing to his friend, the painter Hermann Struck, on 13 August 1913, he noted: The weather here – apart from several wonderful days – has been mediocre. But all the same, I’ve produced quite a lot of work; and have made some progress, I hope.[4]

In addition to the present view of St. Ulrich Corinth produced a landscape titled Bridge in the Tyrol (Berend-Corinth no. 581). He also painted the remarkable Self-Portrait with Tyrolean Hat (no. 586) now in the collection of the Folkwang Museum in Essen and made two portraits of his daughter – Child in a Washtub (no. 578) and Wilhelmine in Traditional Tyrolean Costume (no. 585) – and two portraits of his wife – Girl by a Forest Stream (no. 579) and Tyrolean Woman with a Cat (no. 584). 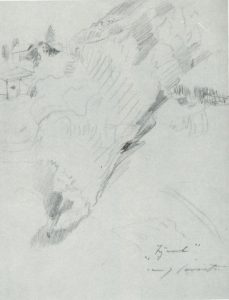 The present view of the hamlet of St. Ulrich depicts a steep hillside with lush meadows and a number of outlying houses. As the title indicates, the work was executed in rainy weather.[5] Corinth probably set up his easel in the open air under a porch or by an open window. This can be deduced from the makeshift way in which the canvas has been loosely tacked, rather than tautly stretched on a frame; and from the choice of a noticeably reduced palette. The brushwork suggests energy, but in spite of its bravura and the use of thickly textured paint, the painting is rich in detail – for example, the colorful Lüftlmalerei[6] on the facade of the building at the left, and the tiny outline of an electricity pole at its right (see Fig. 1: The Corinth Family in the Mountains, the photograph shows a pole at the left). A preliminary drawing (Fig. 2) for the present painting shows the general topography of the view sketched with rapidly hatched strokes in a steep diagonal rising from the lower left to the upper right.

[1] Friedrich Lenzner, born 1880 in Stettin, was co-owner of a paper mill. He and his wife Emmy were members of the Protestant church.