Lovis Corinth was one of Germany’s three leading exponents of Impressionism, the others being Max Liebermann and Max Slevogt. From 1912 onwards, the boundaries between Impressionism and Expressionism became increasingly blurred in his work. After suffering a physical collapse in December 1911 he changed his style. It came to be defined by increasingly spontaneous, impulsive handling of paint. Atmosphere, colorfulness and light became the central focus of his paintings. This is particularly noticeable in his late work, much of which was produced in his house at Walchensee and is characterized by a powerful, free ductus where forms meld and dissolve – compositions on the cusp of abstraction.

The present painting titled Red Roses was executed in 1925, the year of Corinth’s death. It is one of a small, very striking group of late still lifes. In these paintings the notion of vanitas traditionally bound up with still-life painting finds expression in a unique way. The vibrancy and beauty of the flowers are reminders of their transience. In each bloom decay is omnipresent. Color, especially the fluid, impulsively applied red tones of the roses, dominates the image. The play of reflections on the tall, cut-glass vase and voluted decoration of the sideboard on which it stands is freely handled. 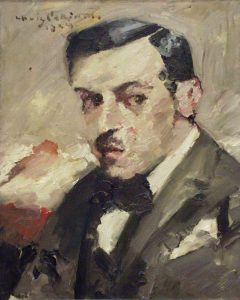 ‘Every brushstroke represents throbbing life,’1 noted the art critic Gustav Pauli in 1924. At the time – a year before Corinth’s death – his highly charged late style enjoyed broad recognition. His late period was not only considered an important part of his oeuvre but judged to be the expression of an artistic power that secured him a pre-eminent position among the German painters of his generation.

The first owner of the present still life was the banker Dr. Arthur Rosin (1879-1972). Based in Berlin, he began to collect Corinth’s work in the 1920s, becoming both an important patron and a good friend. Corinth painted his portrait in 1924 (Fig. 1). In the early years of the National Socialist regime Rosin and his second wife fled to Italy. They eventually emigrated to New York, taking their entire Corinth collection with them. On Rosin’s death in 1972 the present still life entered the collection of their daughter Karen who had emigrated to the USA in 1935.