We are especially grateful to Hermann Mildenberger for his research findings. They are reproduced here in abridged form.

Ulysses is widely considered to be the prototype of modern man. Sharp-witted, resolute and courageous, he opposes the will of the gods by employing guile and deception. Tischbein portrays Ulysses in the form of a robed portrait bust, depicting him almost as if he were a living monument.[2] In doing so, Tischbein displays understanding of both Ulysses’ character and his historical relevance, two dimensions that were of particular importance to him as an archaeologist and a connoisseur of ancient literature. His encounter with the physiognomist Johann Caspar Lavater and the philologist Johann Jakob Bodmer in Zurich introduced him to the potential of physiognomics in the analysis of facial characteristics. The writings of Homer, notably the Odyssey, preoccupied Tischbein throughout his life: “So fond am I of that book that I [long] nurtured the wish that those around me at my deathbed should place the Iliad on my brow and the Odyssey on my breast; so often did my eyes brim with tears that soddened my breast as they fell.”[3] The present painting was executed during Tischbein’s extended sojourn in Naples (1788-99). It is a product of his intensive engagement with the art of antiquity and the writings of Homer. Against this background he also produced an important illustrated work based on the Odyssey, titled Homer, nach Antiken gezeichnet [Homer, drawn after the Antique]. Publication began in Göttingen in 1801 on his return to Germany.[4] 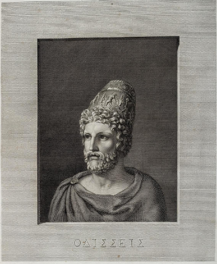 Describing the genesis of the present painting the Weimar-based art historian and Tischbein scholar Hermann Mildenberger writes: Tischbein’s Homer, nach Antiken gezeichnet, a set of etchings and engravings, was the central artistic preoccupation of the literary-minded painter during his last 10 years in Italy. After fleeing the French occupation of Naples in 1799 and returning to Germany, he unwaveringly resumed work on the set of illustrations. He had succeeded in saving a large body of preparatory work which accompanied him on his flight from Italy.[5] He regarded Homer’s two epic poems, the Iliad and the Odyssey, as the quintessence of worldly wisdom, often interpreted in a very personal and subjective way, whereby especially in the late eighteenth century Homer was also considered beneficial as a speculum principum – a mirror for princes [Fürstenspiegel] and manual for use in the education of the children of ruling families. In his publication announcement for the set of illustrations to Homer, Tischbein stated categorically in December 1800: “… no other poet has done so much for the education of mankind as Homer, and will continue to do so.”[6]

As a classicist, Tischbein sought to achieve the greatest possible likeness to antique models. In Italy he worked from original visual sources, copying archaeological models such as statues, busts, reliefs, cut gemstones and motifs taken from ancient vases.[7] 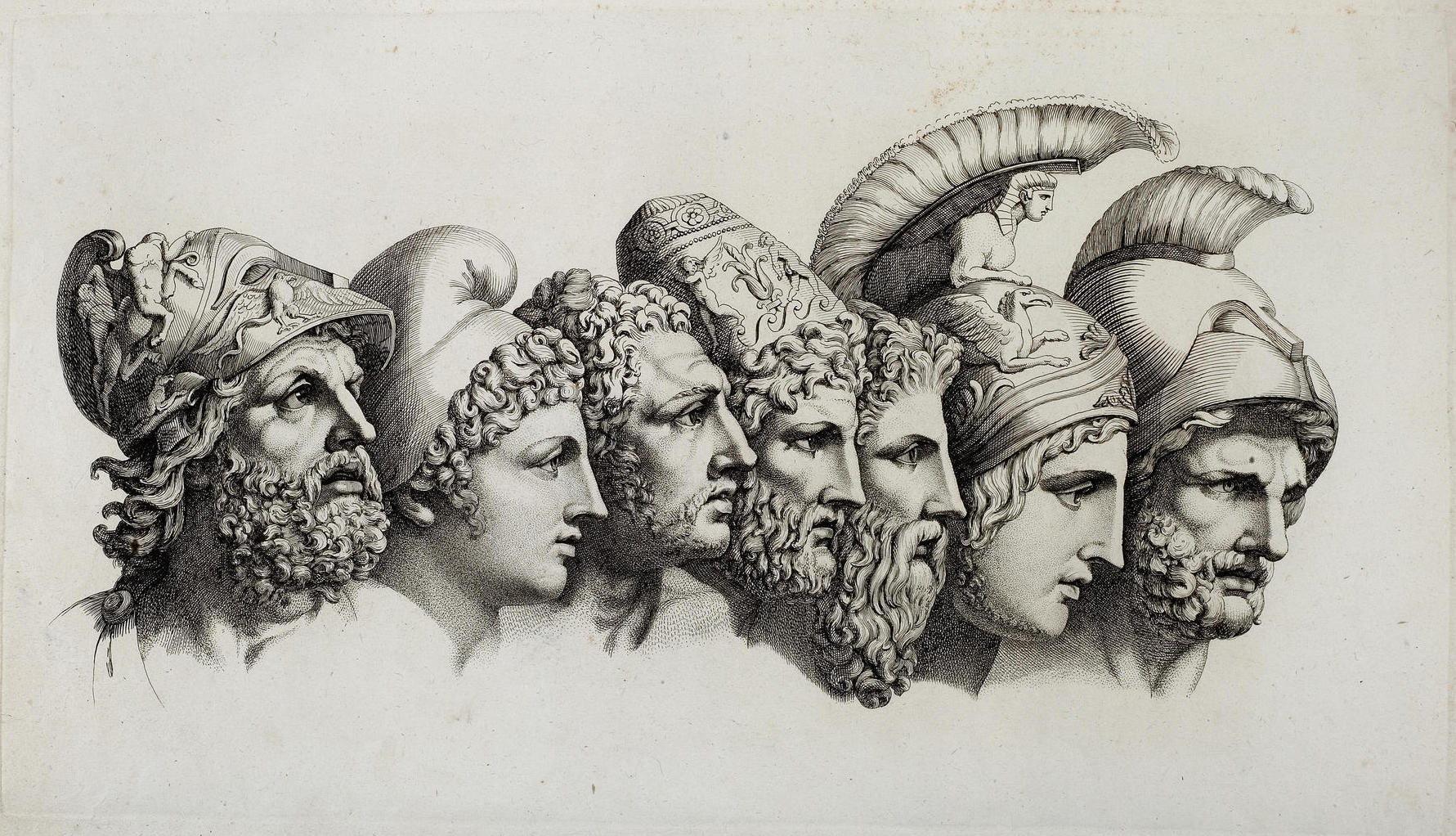 The Homeric motifs served him as a point of departure for the creation of a large number of history paintings. At the same time, he set out to unite his copies (which he interpreted as Homeric) in one great graphic work, an ‘authentic’ pictorial encyclopedia with explanatory texts – Homer, nach Antiken gezeichnet. The engraved title page of the Zweites Heft [second part] depicts the same bust of Ulysses that is depicted in the present painting, albeit with slight modifications. The scale is also very similar – the size of the sheet is large folio (Fig. 1). Andreas Andresen characterized the engraving as follows: “ODYSSEUS (in Greek script). Bust of Ulysses, after a marble bust, frontal view, looking towards the left, on his head a sailor’s cap decorated with lotus and dancing genii. Set in a square wall border. Drawn by Tischbein and engraved by R. Morghen. Lacking artist’s name.”[8] 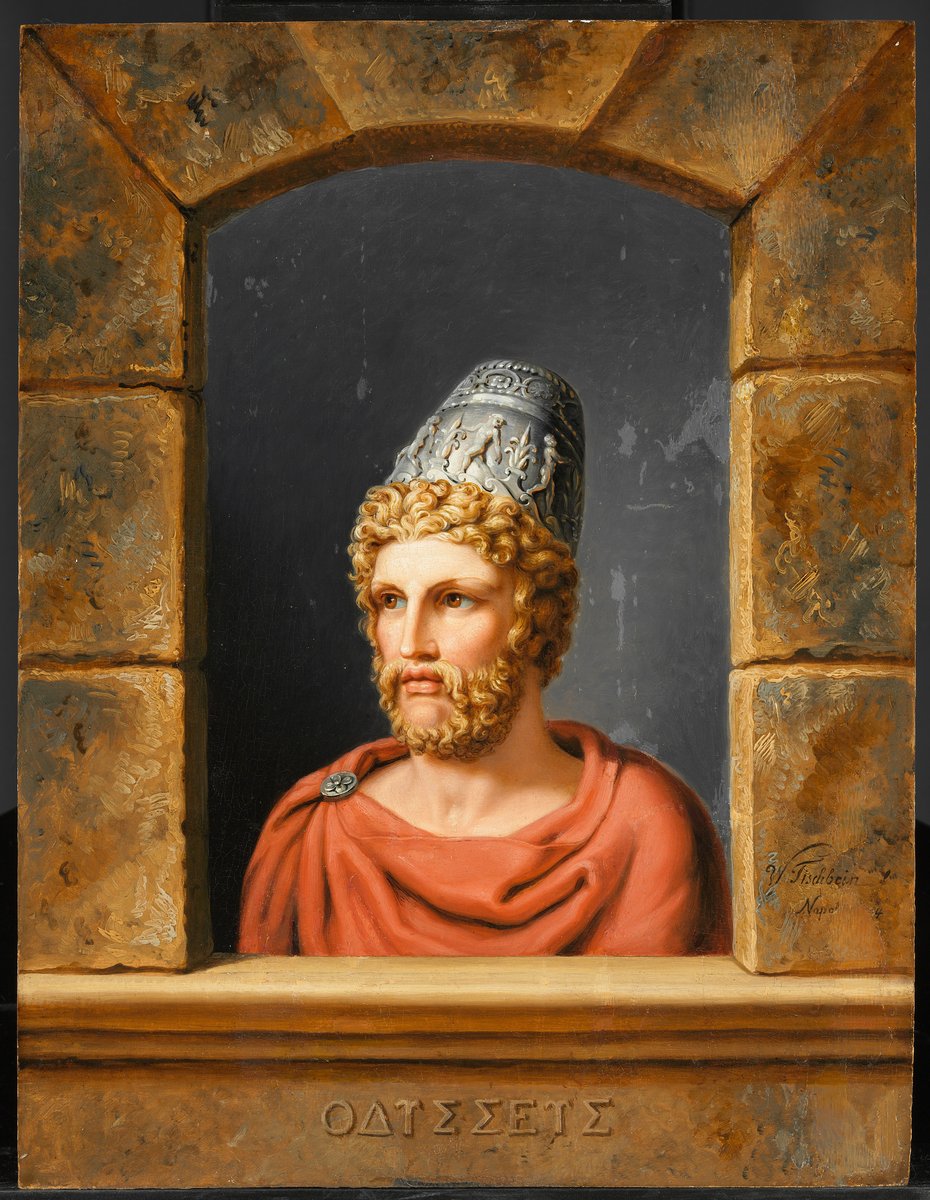 In terms of facial characteristics, the painted portrait bust of Ulysses resembles the engraved version very closely, however its border is entirely different. The border in the engraving is rectangular and its surface has the smoothness and gleam of a cut gemstone. The very precise inscription ODYSSEUS (in Greek script) recalls letterpress. A profile head of Ulysses appears further in the celebrated engraving Sieben Heldenköpfe [Busts of the Seven Major Heroes of the Iliad] (Fig. 2) published in the Erstes Heft [first part] in 1801.[9] In the painting, the border is slightly arched at the top and resembles rusticated stonework with a time-worn, somewhat archaic character. It conveys a greater impression of plasticity and depth than the border in the engraving. Although the black-and-white engraved portrait bust has a certain vitality it seems historically remote in comparison with the more lifelike painted version, which is highly naturalistic in its immediacy, virtually anecdotal. Dated 1794, the painting is one of Tischbein’s earliest works on the Homeric theme. He repeatedly adopted motifs published in Homer, nach Antiken gezeichnet and further developed them in his paintings. The strength of his vigorous inventive powers can also be observed in the present painting.

A further, somewhat weaker rendition of the present painting in Tischbein’s own hand is now in the collection of the Museum of Fine Arts in Budapest (Fig. 3).