Situated midway between Oslo and Bergen, the Nærøy valley was first used as a major trade route in the Middle Ages. Dahl journeyed through the valley and the Stalheim gorge many times on his visits to Norway. This painting is a particularly fine and impressive example of his Norwegian landscapes. A strikingly powerful image, it demonstrates his ability to combine singular motifs drawn from his study of nature with elements that pay tribute to Norway’s cultural heritage. A backdrop of dramatic mountain and rock formations provides the setting for examples of the country’s traditional timber-built constructions. The foreground is bathed in shadow and the strong diagonal formed by the riverbed leads the eye towards a vast light-filled space dominated by towering peaks and massive rocky escarpments. 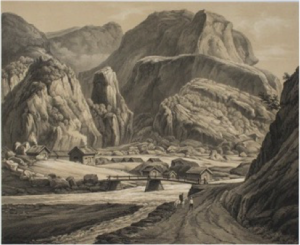 Dahl’s diary entry for August 16, 1847 describes the shipment of three paintings from Dresden to Oslo – one painting destined for the Kunstforeningen in Oslo (Bang 1059), one for a certain Mr. Schiødt (Bang 1060) and one for a Mr. Tønsberg. All three paintings had probably been shown at the Academy in Dresden in July 1847 before they were dispatched to Oslo on August 20.2 Nils Christian Tønsberg, the first owner of the present painting, was one of Norway’s leading publishers. Illustrated books on Norway were among his best-selling publications. The 1853-55 edition of Tønsberg’s Norge fremstillet i Tegninger [Sketches of Norway] (Fig. 1) reproduces a lithograph after Dahl’s painting. The original was by then in Tønsberg’s private collection.

1 Nils Christian Tønsberg was a Norwegian publisher. In the nineteenth century his publishing house was the largest in Norway. See <https://nbl.snl.no/Christian_T%C3%B8nsberg> (accessed January 24, 2019).