Alchemy and astrology are traditions that reach far back into antiquity. Just as astrology sees in the constellations a direct influence on human lives, alchemy is guided by the belief that substances have a practical application which human beings should exploit to their own advantage. In early modern Europe, alchemy was increasingly preoccupied with transmutation, the process of turning base metals into gold. Contemporary society regarded the alchemist either as a scholar vainly searching for ultimate truth or as a charlatan. In painting, the portrayal of the alchemist is correspondingly diverse. The subject enjoyed particular popularity in Dutch seventeenth and eighteenth-century painting, offering a moralistic message and frequently, an element of caricature.

Pieter Bruegel the Elder’s (c.1525-69) satirical drawing The Alchemist (Fig. 1) is without doubt the most significant representation of the obsessive, luckless alchemist whose entire energy is invested in the fruitless activity of transmutation, ultimately driving both his family and himself to the poorhouse. The image was widely disseminated in engravings and had a formative influence on later generations of artists. 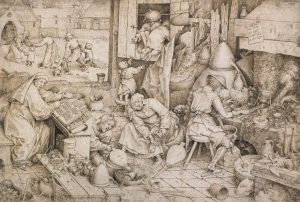 In the present painting Jan Steen takes up the second of the two established ideas of the alchemist – the perception of the alchemist as a charlatan who cheats simple souls of their worldly goods. The setting is an alchemist’s workshop. An anguished woman stands at the center of the image. At her side is a small boy with a distraught expression, staring out at the viewer. The woman’s money purse is prominently placed in the foreground and lies empty on the floor. The alchemist and his cronies have succeeded in stripping her of her jewelry and she has given her very last penny for the transmutation. The scribe, the elderly hunchback and the helper in the background hardly inspire confidence. One of the alchemist’s cronies holds up a document as if to convince the woman of the imminent success of the transmutation. The alchemist turns towards her seeking eye contact. A sheet bearing the text of a formula is ostentatiously attached to a beam at the upper right. This, too, is designed to inspire confidence in the actions taking place. Written in large letters on the sheet are the words THEOFRASTUS/ PARESELSIS ESHO12, a reference to Philippus Aureolus Theophrastus Bombastus von Hohenheim – better known as Paracelsus (1493-1541), the legendary doctor, alchemist and astrologer who chased the secret of the elixir of life. An important element in understanding Jan Steen’s painting is that the woman has not handed over lead or colored metal such as copper or brass but silver jewellery and a large silver piece – of which the tricksters are on the point of defrauding her.

François Godefroy (1743-1819), in his engraved version13 of the painting, executed in the last quarter of the eighteenth century, adheres to Steen’s interpretation of the scene. The print bears a title in the lower margin and a six-line inscription of admonitory verse in French14:

THE TRICKSTERS AND THE CREDULOUS PEASANT

The while your wife weeps, callous churl
Do you think from her jewels to make gold unfurl?
By the Earth created, never shall this precious Metal
By crucible be Sired.
Of these vile Imposters avoid the lure
Much they may promise, but little fulfil. 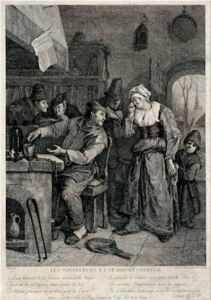 In his contribution to the catalogue of the major exhibition of Steen’s work at the National Gallery of Art in Washington in 1996, Lyckle de Vries defines Steen’s oeuvre as follows: “Even before Theophile Thore-Bürger characterized Jan Steen as a ‛painter of comedies’ in 1858, many people had recognized humor and story-telling as the nucleus of his work. More than once he was called the ‘Moliere of painters’. All the means available to a painter were made subservient to that narrative interest. The pictorial realization, which often refined but also occasionally careless in the details, is invariably at the service of the content. That content, seldom summarized in forthright inscriptions, is a succession of familiar lessons in living wisely: Ten Commandments and a thousand prohibitions. But this is not to characterize Jan Steen as a disgruntled moralist. He was more of a cabaret artist, comedian, or comic play writer who confronted his public with the old values and truths it loved, expressing himself not in words but in paint. The moralization, however, takes on an unexpected topicality as a result of Steen’s provocative presentation. The choice between good and evil is once again as clear as day, and the audience’s position no less so. The spectators may be kept briefly in a state of amusing confusion, but in the end ‛the others’ are always the ones mocked for their foolish misbehavior.”16

A literary source may also have influenced Steen’s representation of the alchemist. In 1619, Richard Verstegen first published a volume of seventy-two character studies in prose titled Scherp-sinnighe characteren. Three years later he published an extended version as Honderdt Geestige Caracteren, ofte Uitbeeldingen van Honderdt Verscheidene Personen, with no less than one hundred studies of characters from all levels of society. He gives an accurate description of the alchemist and emphasizes the trust that people such as the peasant woman depicted in the present painting foolishly place in the alchemist’s hands: Een Alchemist is het Voedtster-kindt van de hoop, die hem altos mamt, en nimmermeer speent.17 Verstegen ends the chapter with a truthful and descriptive poem which directly recalls Steen’s caricature of the obsessive alchemist:

Deplorable seekers of that which you will never find, More lamentable than ridiculous in your pursuit, Or both, because you still – like madmen – Buy losing lottery tickets at the expense of honour, health, money and labour. Surely your failure to find anything serves as a beacon of your squandering? So say, finally – all together now. Woe betide us alchemists!18 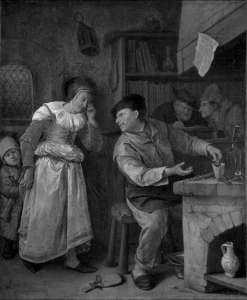 The date of execution of the present painting – 1668 – falls within Steen’s mature Haarlem period. In the same year he produced two further paintings of alchemists. A very similar but much smaller version now in the collection of the Städel Museum in Frankfurt (Fig. 3) merits particular mention. There are a number of minor differences in terms of detail. It has only two staffage figures and there is a leaded window at the left, rather than an arched workshop entrance with a landscape view. Wouter Kloek sees the Frankfurt painting as preliminary to the present work.With a provenance19 reaching back into the eighteenth century, the present painting not only occupies a key place in Jan Steen’s oeuvre, but it is also one of the last remaining depictions of an alchemist by Steen in private hands.

We are grateful to Wouter Kloek, Emeritus Head Curator Rijksmuseum Amsterdam, for endorsing the attribution to Jan Steen after inspecting the painting.

2 A landscape and history painter, Sir Francis Bourgeois was court painter to King George III (1738-1820). He also became an art dealer and collector in association with Margaret and Noel Desenfans. He was co-founder of the Dulwich Picture Gallery in London.

3 Samuel Jones-Loyd was a banker and politician who assembled a highly significant collection of paintings. He was one of the partners in the consortium which in 1846 acquired the collection of Dutch and Flemish pictures owned by the late Baron Johan Gijsbert Verstolk van Soelen (1776-1845).

5 In February 1927, Jacques Goudstikker moved to a larger gallery at Herengracht 458. It is feasible that this was the first painting Goudstikker handled in his new premises, as the label on the stretcher also gives the Herengracht address. If this is the case, Goudstikker probably bought the painting directly from the Earl of Crawford and Balcarres after seeing it at the Leiden exhibition in 1926.

7 H. C. W. Tietje, like Wolf, was a wealthy industrialist and art lover. Wolf and Tietje were mutually involved in various business transactions.

9 From 1937, the family resided on the Groot Haesebroek country estate in Wassenaar. Daniel Wolf was in France at the time of the German invasion. He was unable to return to the Netherlands but managed to escape to England. Later in the war, he moved to the United States and died in New York in 1943. Groot Haesebroek was seized shortly after the German invasion of the Netherlands in May 1940, and subsequently served as a residence for a high-ranking Nazi official.

11 See the recommendation regarding Wolf, dated 9 November 2009 issued by the Advisory Committee on the Assessment of Restitution Applications, case number RC 1.101, and the receipt from the Stichting Nederlands Kunstbezit (SNK), dated 31 March 1948.

19 Charles Sebag-Montefiore researched the English provenance of the painting.