An Ox in a Landscape

We are grateful to Dr. Claudia Nordhoff, Rome, for her evaluation of the painting, dated 4 February 2013, which is summarized in this text.

The landscapist Jakob Philipp Hackert[1] had already spent eighteen years in Rome working as a independent artist when in 1786 the Bourbon King, Ferdinand IV, appointed him official court painter in Naples. With this prestigious appointment he had confidently expected to enjoy considerable social and financial benefits for the rest of his life. But in January 1799 French revolutionary forces occupied Naples and he was forced to leave the city in March. He moved to Tuscany and applied himself to rebuilding his life with the self-discipline and determination which marked his entire artistic career.

He settled in the country near Florence, where he was to spend his final years in seclusion unfettered by the demands and constraints of court life. Here, he was finally free to pursue his own interests and to take up a fresh approach to the portraiture of animals. Decisive to this development was his friendship with the wife of an English army officer, Colonel Woodburn. Hackert had probably been introduced to Mrs. Woodburn in Florence in 1800 and the friendship had quickly developed. The Woodburns owned a country estate in Settignano, a small village just outside Florence which they placed at Hackert’s disposal when they were not in residence. In a letter dated 9 January 1802 to Baron Balthasar von Haus, an old acquaintance in Vienna, Hackert writes: Until the 20th of Nov. I was here in the country some four miles from Florence. An English lady who is my friend has granted me, while she is in England, the enjoyment of the house with all [its] comfort, I am there a great deal, making entirely from nature finished works of animals and other things, for my studies are now becoming finished paintings.[2]

Hackert executed a group of small, vertical-format ‘bovine portraits’ during the period he spent in Florence. One is dated 1804 and the majority depict a view of a distant landscape boldly contrasted with the confined pictorial space of the foreground.[3] 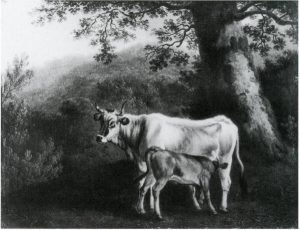 The present painting of a white ox, viewed with its head to the left, belongs to this group. Hackert devotes meticulous attention to the individuality of the animal. The image bears comparison with a painting now in the collection of the Von der Heydt Museum, Wuppertal (Fig. 1).[4] It is a signed but undated portrait of a cow with a calf and, like the present painting, in horizontal format. In both paintings the animals are shown standing by a large tree trunk only partially visible to the viewer, and in both an expanse of sky rises above the rounded crests of distant hills. It is more than likely that the two paintings were executed at about the same time. They may even have been conceived as pendants – the ox, the cow and the calf as something of a family group.

This painting stands out in the group of post-1800 ‘bovine portraits’ for its exceptionally fine handling and masterly colouristic qualities. The lush pale green of the grass under the ox’s hooves serves to direct the focus to the sheer whiteness of the animal. Its bulky muscularity is contrasted with the delicately defined grasses glinting golden in the sun and the filigree foliage of the bushes in the middle ground. At the left of the image is a distant view of a plain and behind it, a succession of hills bathed in delicate shades of green, blue and grey. A building, perhaps a castle, can be detected. In this small format Hackert has achieved an astonishing blending of distances with remarkable aesthetic balance: nature unconfined and where every animal portrayed, whether ox, cow, goat, donkey or even hare, might find a place.

The outstanding quality of the present painting explains the extraordinary success of the new genre of animal portraiture launched by Hackert in the years following 1800. He sold similar paintings to distinguished figures like the Spanish prime minister Don Manuel de Godoy (1767-1851)[5] and Heinrich XLIII von Reuß-Schleiz-Köstritz (1752-1814).[6]