What a tale of misery and despair is here told by the pencil.2 (Julia Pardoe, 1838)

Vincent-Marie Moulac, the Captain of the Melpomène - a frigate named after the Greek muse of tragedy - set sail for Algiers from Brest in June 1833. It called at the port of Lisbon where an outbreak of cholera was raging. There, in the space of a few days, nearly twenty members of Moulac's crew succumbed to the disease. Other victims were left to their fate in Lisbon. The Melpomène reached the port of Toulon on 11 July. A further nine dead were aboard. The crew were refused permission to go ashore and the frigate was placed under quarantine at its moorings for several months. Only twenty-four crew members survived. Toulon was thus spared an epidemic.3

Horace Vernet chose this remarkable current event as the subject of a monumental painting commissioned by the city of Marseilles for the council chamber of the Intendance sanitaire (Fig. 1). Two major works were already in situ - a marble relief titled St. Charles Borromeo praying for an End to the Plague in Milan by Pierre Puget and Jacques-Louis David's painting, St. Roch interceding to the Virgin Mary to Save Victims of the Plague. The Intendance sanitaire had also commissioned large-format works from two other artists in addition to Vernet. Both works were to depict a major tragic event and were to hang in the council chamber to complete a cycle. The subject chosen was to make reference to an epidemic - for example, the plague. The designs of the images were to be left to the artists.4 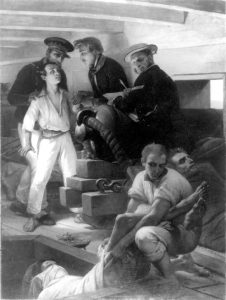 The project was officially offered to Vernet by the treasurer of the Marseilles' Intendance sanitaire on 13 August 1833. Vernet accepted the commission in October and a fee of 8,000 francs was agreed to. In late November 1833 he announced his decision to take the recent tragedy of the Melpomène and its crew as his subject. He began work on a group of preliminary sketches and oil studies. The present study very probably belongs to this group. In a letter dated 11 September 1834 Vernet made it clear that the painting would be completed by the end of the year and shipped to Marseilles in the following spring. The painting duly arrived in the spring of 1835.5 Ironically, shortly after its arrival, a cholera epidemic broke out in the city. Vernet's vivid depiction of the horrors of cholera had anticipated real life.

The present oil study was almost certainly executed with the intention of clarifying compositional and thematic questions. The scene is set below deck. A ship's boy, his wide with terror, is having his pulse taken by the ship's doctor. All present are aware of the hopelessness of the situation. To get cholera was to receive a death sentence. Cholera victims are depicted in the foreground, writhing in despair. A corpse lies between them. The drama of the foreground scene is heightened by the use of emphatic foreshortening in the depiction of the body. Vernet was a close friend of Théodore Géricault and thought highly of his work. Here, his handling of the scene shows a certain stylistic rapport with Géricault.6 Comparison between the present study and the finished version of the painting shows major differences, especially in the handling of the foreground. Vernet's prima idea may have appeared too drastic to the council members of the Intendance sanitaire. In the finished painting there is certainly greater emphasis on narrative content. An older man, perhaps a registrar or official, stands beside the ship's doctor carefully recording his findings in a ledger.7 The grim depiction of death in the foreground loses much of its immediacy. There is something of a traditional burial scene in the poses of the peripheral figures in the foreground.

This oil study was at one time owned by the painter Eduard Hildebrandt (1817-68). It was in his possession at his death and was sold when his property was dispersed in a sale held at his home in 1869. Hildebrandt moved to Paris in 1841 and studied under Eugène Isabey (1803-86). Isabey was a close friend of Vernet's. It is not known how Hildebrandt acquired the study and how it came into the hands of an English collector.8

Vernet came from a family of painters. His grandfather, Claude Joseph (1714-89), was a leading exponent of marine painting and had Louis XV as a patron. Vernet's father, Antoine-Charles-Horace, known as 'Carle' (1758-1836), was a popular painter of battle scenes. The Napoleonic Wars were to have a formative influence on Vernet's artistic career. He was an enthusiastic supporter of the Empire and specialized in scenes depicting the military career of Napoleon. His place in art history is based on his heroic battle pieces and patriotic depictions of French military triumphs. He also produced a large body of work which included portraits and motifs relating to contemporary history, literary and biblical themes.

Vernet was appointed Director of the Académie de France at the Villa Medici in Rome in 1829. The appointment was a success and he occupied the position until 1834. He returned to Paris in 1835 and began a highly productive career with all the benefits of wealthy patronage under the July Monarchy. Louis Philippe commissioned him to paint an important group of works for Versailles depicting French military themes. In the 1840s he travelled extensively, visiting Algeria, Egypt and Russia. After the abdication of Louis Philippe he went on to be an official painter under a succession of governments and during the Second Empire Napoleon III was to be one of his patrons.

2 Julia Pardoe, describing the painting in The River and the Desert; or Recollections of the Rhone and the Chartreuse, Philadelphia 1838, letter XIII, p. 90-2.