Giuseppe de Nittis is one of the best-known Italian painters of the nineteenth century. He took up his studies at the Istituto di Belle Arti in Naples but early on abandoned the academic tradition of his training. He came into contact with the group of young Florentine painters known as the Macchiaioli and following their example, began to practise plein-air painting. He moved to Paris in 1868 and quickly made his name in artistic and literary circles. The outbreak of the Franco-Prussian War in 1870 prolonged a visit to Italy and it was almost three years before he could return to Paris. At this time the landscapes of Italy were his preferred subject – his impressions of Vesuvius are among his best-known works – and his preferred medium the plein-air oil sketch, which he honed to unparalleled perfection. Soon after his return to Paris he participated in the first exhibition of ‘impressionist’ painting staged in 1874 in the studio of the photographer Nadar. In London de Nittis’s reputation flourished, like that of his contemporaries Tissot, Whistler and Monet. He was an influential figure in the world of art and letters and his Paris residence a popular meeting-place for leading French and Italian artists and writers, particularly Degas and Manet, Daudet and Zola.[2]

De Nittis first visited London in 1874.[3] Here he was introduced to Kaye Knowles, a banker who was to be his most important English client. De Nittis travelled back and forth between Paris and London in the years 1874 to 1881, and was also frequently in Italy. In 1879 he spent the months of April to August and November to December in the British capital. In July a one-man exhibition of his work was opened at the King Street Galleries. He took many of London’s famous landmarks as his subjects – the Bank of England, the National Gallery, Trafalgar Square, Piccadilly and Westminster (Fog over Westminster Bridge, 1878). In addition to painting scenes of everyday life in the big city he also produced sensitive impressions of its quieter corners. These latter works recall Claude Monet – particularly the views he painted on his visit to London in 1870-1 – impressions of the Thames, Green Park and Hyde Park seen from different viewpoints.[4] 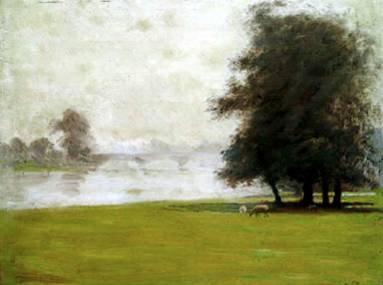 De Nittis painted a series of views of Hyde Park.[5] Four of these are oil sketches in almost identical format – the present painting is one of them, and another is titled The Bridge (Fig. 1). In addition there is a smaller Hyde Park view titled Paesaggio Inglese IV. They were all executed near the Serpentine, an artificial lake in Hyde Park (Fig. 2).[6] At the right of the present image, rapidly sketched, are two arches of the Serpentine Bridge. A brownish-green expanse of lawn stretches across to the edge of the lake and occupies the lower half of the image. The shadowy reflection of a line of trees on the far bank darkens the water, its surface mirroring patches of cloud in the sky. This masterly plein-air oil sketch testifies to de Nittis’s virtuosity in capturing momentary mood and atmosphere, a skill he doubtless acquired through his close contact with the French Impressionists. 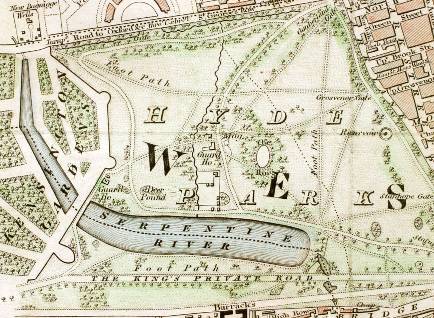