Fernand Khnopff and James Ensor (1860–1949) are the two leading representatives of Belgian Symbolist art. Symbolists typically had very broad ranges of interests in many different artistic genres and Khnopff was no exception. He actively engaged with contemporary literature and produced stage designs.

Khnopff’s enigmatic, highly sought-after portraits form a major part of his oeuvre. Between 1884 and 1890, for example, he created thirty-four portraits. They reflect the mind-set and self-image of bourgeois society in Brussels.[1] The portraits are essentially realistic but characterized by his manipulation of the motif, his use of perspectival adjustment and his juxtaposition of sharp outlines and blurred contours. This evokes the sense of mysticism and other-worldliness found in the ‘mystifying’ dream imagery of David Lynch today. Particularly in his portraits of children, Khnopff succeeds in conveying a visual image of the corset of bourgeois convention that makes no distinction between being a child and being an adult. The portraits also reference the isolation of the individual in the modern world. 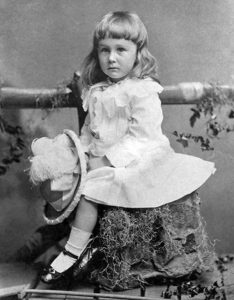 The Counts van der Straeten-Ponthoz were members of the Belgian nobility. This full-length portrait depicts Count Roger at the age of six. He is perched on the edge of a high armchair balancing the tips of his toes on a foot cushion for support. He is dressed in girl’s clothing. This may seem somewhat surprising but the practice, of feudal origin, continued in haute bourgeoisie circles down to the early twentieth century (Fig. 1). As the sociologist Phillipe Aries notes in his book History of Childhood, the phenomenon is based on the division of society into gender-specific spheres – the female, assigned to the home and housekeeping, the male more geared to the outside world. Boys were initially associated with the female sphere and were dressed accordingly, only to switch to the male sphere in puberty. 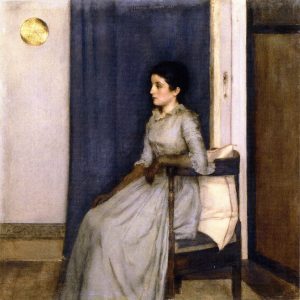 The arrangement of the armchair parallel to the picture plane and the avoidance of direct eye contact with the sitter keep the viewer at a distance. To Khnopff, the studio was a charmed environment and many of the objects that surrounded him appear and reappear in his portraits. This gives them something of a signature character. Examples are the open armchair with its slender arm supports and the Japanese serving bowl hanging on the wall.[2] Both objects also appear in Khnopff’s portrait of the Brussels publisher’s daughter Marie Monnom (Fig. 2).

The Symbolists aimed to use the portrait as an instrument of psychological analysis. In this, their style and approach could not be more diverse. While Jean Delville (1867–1953), Léon Spilliaert (1881–1946) and James Ensor made use of grimace, bizarre humor and mask-like facial distortion to evoke the inner thoughts and emotions of the sitter, painters such as Khnopff, Degouve de Nuncques (1867–1935) and Whistler (1834–1903) focused on the “loveliness and grandeur” of the subject.[3]

Khnopff entered law school in Brussels at the age of eighteen but soon dropped out to study at the Brussels Academy of Fine Arts under Xavier Mellery in 1876. Early on he met Jean Delville, James Ensor and Guillaume Van Strydonck (1861-1937). In 1878 he moved to Paris to attend the Académie Julian. This was an important meeting place for progressive young artists frustrated by the intellectual constraints of conventional academy teaching. Contemporary Realist painting had a formative influence on Khnopff’s work. Further artistic and literary influences included Gustave Moreau (1826–98) and the works of Flaubert (1821-80), Baudelaire (1821-1867), Georges Rodenbach (1855–98) and Verhaeren (1855–1916).[4] As his career and international recognition progressed he advanced to be a leading representative of Symbolist painting in Europe.

He was in England briefly in 1877 and this first visit was followed by lengthy stays in later years. He became something of an anglophile, and a friend and admirer of the Pre-Raphaelite painters, in particular Burne-Jones (1833–98). In 1881, he contributed to a group exhibition organized by the Brussels artists‘ association “L’Essor” which rejected the academic tradition in painting.[5] In 1883, he was one of the founding members of “Les Vingt” (Les XX), a Brussels-based exhibition society closely attuned to developments in Paris whose members included a group of Belgian Symbolists and Decadents. Khnopff designed the poster and catalogue for their first exhibition. The group became one of the centers of the Belgian avant-garde.[6]

In 1884, Khnopff met the writer and critic Joséphin Péladan (1858–1918), leader and originator of the “Ordre de la Rose + Croix Catholique du Temple et du Graal”, an organization that provided a forum for Symbolist musicians, artists and literary figures. In opposition to the traditional Salons, Péladan staged six Rosicrucian Salons in Paris in the 1890s – they were the flagship of French Symbolism. The Ordre was probably the most influential Symbolist movement of the fin de siècle, an anti-materialist, occult organization with trappings of religious mysticism. It drew its name from the secret order of the Rosicrucians, an esoteric brotherhood founded in Germany in the late Middle Ages. Khnopff exhibited at the second “Salon de la Rose + Croix” in 1893.

Invitations to contribute to major European exhibitions marked the high point of Khnopff’s international reputation. A major success was the exhibition at the Vienna Secession in 1898, where an entire room was given to his work. He was praised by contemporaries such as Gustav Klimt (1862-1918)[7] and Franz von Stuck (1863-1928). He designed the stage set for Rodenbach’s play Le Mirage, performed at the Deutsches Theater in Berlin in 1903 under the direction of Max Reinhardt (1873–1943).