We are grateful to Marina Ducrey for her help in the preparation of this text.

Félix Vallotton visited his friend and colleague Paul Deltombe (1878-1971) in the Loire village of Champtoceaux near Nantes in June 1923. He had previously explored the Loire countryside in the years 1914 and 1915 and it had made an enduring impression on him. At the end of June 1923 he returned to Honfleur, which he had visited regularly since 1899. Writing to his brother Paul on 17 August 1923 he documents the influence of the landscape sketches he had made on the Loire. He remarks that he has completed as many as thirteen canvases in the meantime and describes his satisfaction with them.1

Vallotton’s letter throws important light on his working methods. In Champtoceaux he produced a large number of sketches of the village and the neighbouring countryside, later using them as the basis for paintings executed in the studio. The present canvas is one of these paintings. The preparatory sketch for it is preserved and is now in a private collection in France (Fig. 1). The sketch shows how Vallotton modified the existing architectural and topographical features of the landscape in preparation for his painting. The tower in the background is one of the two towers flanking the large entrance gate of the medieval fortress of Champtoceaux.2 The sketch carries a numbered colour code – colour-coding is a well-established and reliable aide-memoire. Here, the colour code is particularly interesting because it shows that Vallotton gave himself the freedom to add intensity to the colours of his palette. This stage of his career saw him moving away from realistic depiction in favour of a simplified approach deploying rhythmical colour sequences in repetitive patterns. This stylistic device is also found in Bonnard’s painting.3 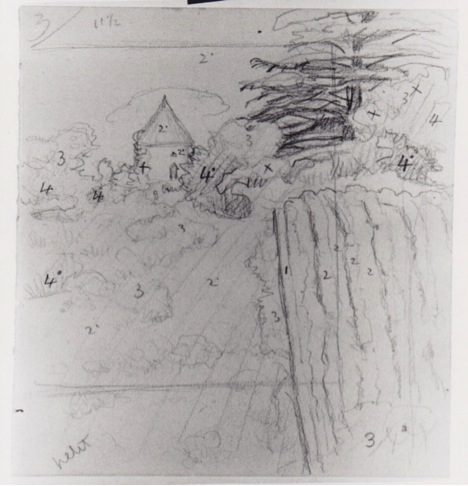 Vallotton was born in Lausanne in 1865 and studied at the Académie Julian in Paris. He exhibited with the Nabis and was a friend of Edouard Vuillard and Pierre Bonnard He worked as an illustrator, journalist and playwright. In the 1890s he achieved popular success with his innovative woodcuts. These are characterized by striking clarity, careful arrangement of surfaces and sharp black-and-white contrasts. In 1899, he shifted his artistic focus to concentrate on painting. As early as 1885 he had begun to compile a systematic chronological catalogue of his works. This he called his Livre de raison. He ranked as a leading member of the Symbolist movement up to his death in 1925. His pictorial vocabulary was of ground-breaking importance to Surrealism, ‘Pittura Metafisica’, Neue Sachlichkeit and even Pop art.

The present painting was acquired by the collector Lily Goujon-Reinach in the year it was painted. In the years before the First World War, Lily and her husband Pierre Goujon had put together one of the most important collections of modern art in France. Pierre Goujon died young – an infantry officer, he was killed in action in August 1914. At the time of his death the couple owned ten works by Vallotton, most of them funded by Lily’s father, Joseph Reinach.4 Lily went on to acquire five additional paintings by Vallotton after her husband’s death. The collection consisted of three hundred paintings, including works by van Gogh, Monet, Manet, Degas, Corot, Rembrandt and of course, Vallotton.

1 Letter dated 17 August 1923: I have made thirteen canvases from the notes I took in the Maine-et-Loire and I believe this to be quite a good group. Ducrey, 2005, op. cit., p. 801. Only one other letter to Vallotton’s brother and a postcard to Jacques Rodrigues-Henriques provide information on his stay in Champtoceaux.

2 In the Middle Ages, Champtoceaux, or Châteauceaux, was one of the most important fortresses in France, Anjou’s bulwark against the Duchy of Brittany, England’s ally. In the War of the Breton Succession John V, Duke of Brittany (Jean le Vaillant, 1339-99) was held prisoner in Champtoceaux. Freed by the English troops, he ordered the destruction of the fortress.