The Ernst Wilhelm Nay Stiftung will include the work in volume III of the forthcoming catalogue raisonné of E.W. Nay’s watercolors, gouaches and drawings. It has been allocated the registration number CR 55-047.1

The present watercolor is a fine early example of Ernst Wilhelm Nay’s Scheibenbilder [composition of discs]. This important body of work was executed between 1954 and 1962. It now ranks as one of his most highly sought-after series. Nay was an individualist with no professed identification with any particular group of artists, although he was attracted to elements of the Art Informel movement in Germany. The Scheibenbilder series saw him develop a unique abstract pictorial language. In his book titled Vom Gestaltwert der Farbe, published in 1955, he described the genesis of the Scheibenbilder:

‘This is how it started: I began making simple new experiments and discovered that if I applied a brush to the canvas it produced a small blob; and if I enlarged the blob, I then had a disc. The presence of the disc was already having quite an effect on the surface. If I added more discs, this created a system of colored and quantitative proportions which were then combinable and could be further configured to create larger pictorial systems.’1 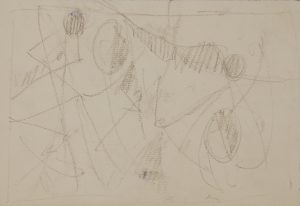 At the Entartete Kunst exhibition in Munich in 1937 Nay was one of the youngest painters to have his work denigrated as ‘degenerate’. He was banned from exhibiting and was unable to pursue his career as an artist until 1945. In the following twenty years he gradually distanced himself from figurative art. In his earlier paintings and drawings he had focused on dunes and fishermen, mountains and lakes. But in the 1940s, color began to take precedence over human forms and objects. Figurative elements paled into insignificance.2 He moved to Cologne in the early 1950s, where he was influenced by the city’s vibrant contemporary music scene. Its impact resonates in a number of the titles he gave his paintings – Silver Melody (1952, CR 600), Vocal Sound (1952, CR 604) and Black Rhythms, Red into Grey (1952, CR 629).
Nay’s Scheibenbilder contributed fundamentally to the development of abstraction in post-war Germany. The series marked a turning point in his career and established him as one of the leading German artists of the post-war period.