Carl Hummel, landscape painter and etcher, was one of nineteenth-century Weimar’s most remarkable artists. He enjoyed widespread patronage, receiving commissions from members of the affluent bourgeoisie and the aristocracy. His works were sold as far afield as the United States. As a boy, he was introduced to Goethe by his father. His father was the celebrated Hofkapellmeister and composer Johann Nepomuk Hummel, who regularly invited Goethe, a close friend, to attend private musical events at the family home.[1]

Carl Hummel began his artistic training at the age of twelve under Friedrich Preller the Elder (1804-78). He accompanied his teacher on trips to Norway, the island of Rügen, Holland and the Tyrol. He was in Italy in the years 1842-5, staying chiefly in Rome, Capri and Sicily. He later returned to the south on study trips to deepen his knowledge of Alpine and Mediterranean landscapes. In 1855 he travelled to Lake Como and was in Corsica in 1860. In the second half of his life, by now a professor at the Weimar School of Drawing, he travelled extensively in his native Thuringia. On his travels it was his practice to produce a large body of drawings, watercolours and oil sketches.

This painting depicts the amphitheatre at Taormina in Sicily, a Roman structure built on the foundations of an older, Greek theatre. The high viewpoint interacts with the architecture and the surrounding landscape to provide the viewer with a magnificent panorama – a panorama encompassing the Gulf of Naxos and the snow-capped peak of Mount Etna. At the right is a distant glimpse of the roofs and towers of the village of Taormina. On his travels in Italy Hummel visited the recommended sites on the Grand Tour like so many European painters, poets and culturally minded Grand Tourists before and after him. The culture of the Grand Tour focused on the Greek and Roman heritage with its architecture and statuary but also included the study of landscape settings. Sicily lay on the periphery of the usual itinerary – at least up until the unification of Italy in 1861.

It is very probable that Hummel was familiar with Goethe’s Italian Journey, in which he describes his impressions of a visit to Taormina in May 1787:

After climbing the steep cliffs near the sea one reaches two summits connected by a half-circle. Whatever shape it may have had originally, Art has assisted Nature to build this semi-circle which held the amphitheatre audience [...]. The proscenium was built in a diagonal at the foot of the tiered half-circle, stretching from cliff to cliff to complete a stupendous work of Art and Nature. If one sits down where the topmost spectators sat, one has to admit that no audience in any other theatre ever beheld such a view. Citadels stand perched on higher cliffs to the right; down below lies the town. [...]. Straight ahead one sees the long ridge of Etna, to the left the coastline as far as Catania [...]; and the whole panorama is capped by the huge, fuming, fiery mountain, the look of which, tempered by distance and atmosphere, is, however, more friendly than forbidding.[2] 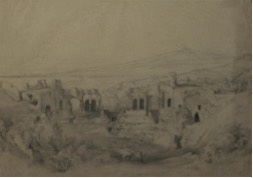 The present painting is accompanied by its preparatory drawing (Fig. 1). Executed before the motif, it is dateable to Hummel’s Italian period and thus to the years 1842-5.

A major retrospective of Hummel’s work is due to open in Weimar in the summer of 2016. Interest has been expressed in including the present painting in the exhibition.