Axel Fridell[1] was born and raised in Falun, where he attended evening classes in art. In 1913, he moved to Stockholm, where he worked in the studio of the painter Carl Wilhelmson. Fridell enrolled at the Royal Swedish Academy of Art to continue his studies. His teacher at the Academy’s school of etching was Axel Tallberg, who encouraged him to develop skills in a range of printmaking techniques.

As an Academy student Fridell and many of his fellow students partied so excessively in Stockholm’s bohemian circles that their studies suffered. The dissolute lifestyle they led resulted in the expulsion of a number of students from the Academy in 1916. Fridell was one of them. Fortunately, his mentor Tallberg, convinced of his talent, continued to protect him.

Many of the works Fridell produced during this period reflect his bohemian existence and colorful social life. Most of them depict his friends in cafes and bars, as in the case of his fellow student Einar Forseth (1892-1988). Fridell and Forseth kept in close contact after their student days, as evidenced by mutual portrait drawings from the 1920s and 1930s. Forseth’s best-known work is the Byzantine-style mosaic scheme for the Gyllene Salen (golden hall), a banqueting hall in Stockholm's City Hall (1923).[2] 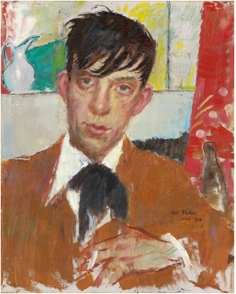 Fridell records Forseth‘s very striking features in two paintings and a number of prints and drawings. One example is the rapidly sketched 1914 portrait (oil on canvas, 56 x 44 cm, with Sotheby's, May 27, 2020, lot 117, Fig. 1). The present portrait of Forseth dates from the following year, 1915. It recalls the genre of artist’s portrait that developed in similar milieus in Paris after the arrival of the Impressionists. Rather than depicting Forseth in the studio with his painting utensils, this portrait shows him behind an array of glasses and liquor bottles from which the melancholy, glassy-eyed young man with flushed cheeks has already drunk copiously.

Fridell was one of the leading Swedish printmakers of the twentieth-century. Evidence of his activity as a painter and watercolorist is confined to his early career. Fridell’s works include portraits, landscapes and cityscapes. They often reflect the darker aspects of existence and occasionally express a mood of anxiety. He signed a contract with the fine art firm Bukowskis in May 1929, giving the firm exclusive rights to the sale of his work in return for a monthly stipend of 750 kronor, valid until June 30, 1931. The last trips Fridell made were to London in 1933, where he visited many of Whistler’s favorite haunts, and to Paris in 1934. He died at the age of forty in Stockholm on May 26, 1935.