Johannes Cornelisz. Verspronck depicts this 59 year old sitter Johan de Waal (1594-1678) directly and honestly in the artist’s perfected mature style. This easily recognized “Haarlem portrait” owes a large debt to Frans Hals; after Hals, Verspronck was the most important portrait painter in Haarlem, receiving numerous prestigious commissions. Here he depicts the sitter’s somewhat wistful and wise face in a glowing halo created with thin wisps of paint over a light ground. The importance of the sitter and of this commission is evident in the inclusion of the akimbo arm and reverse-palm hand positioned in a bravura display of painting to extremely convincing effect. The artist laboured over the position of the chair making at least one major change to the composition. The pentiment reveals the improvement of the illusion, positioning the sitter rigidly upright, off-centre and slightly off-balance as if in the moment of landing on the chair’s surface or about to rise. The casualness of the positioning of the arms and the hat “at the ready” effectively communicates that this important man has paused in mid-motion to have a master paint his portrait.

In 1652, the year of this painting, the Dutch East India Company (Vereenigde Oostindische Compagnie), was embarking on the most ambitious and dangerous commercial, colonial projects in the company’s, and the Dutch Republic’s, history; including the establishment of a trading post in southernmost Africa. This self-assured sitter is Johan de Waal, twice Burgemeester, Haarlem (1627 & 1633), Kolonel, and prominent, along with many other male relatives, officer of the St. Jorisdoelen guild (see fig. 1), and one of the scions of the de Waal family. The family played a major role in domestic politics of the Dutch Republic and a critical role in the formation and success of the Republic’s commercial ventures in South Africa. 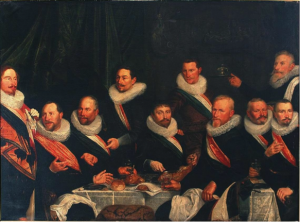 In J.C. de Waal and H D van Louw’s thorough genealogical account, DIE DE WAAL FAMILIE SE GESKIEDENIS OOR 350 JAAR IN SUID-AFRIKA1, the importance of the family and especially the eponymous grandson of the present sitter, Johannes (Jan) de Waal, who travelled to the colony on the ship Tournai and became the Quartermaster and Sexton of Cape Church, a political leader of the colony, and an extremely wealthy man. The name de Waal appears on public parks and buildings, numerous streets, and multiple businesses including a winery ranking among the top 10 in South Africa. The history of the South African nation and the fate of this Dutch family of adventurers, politicians, and businessmen, are intimately interwoven over the next 350 years from the moment of the exploratory mission to the Cape in the same year as Johann’s sensitive portrait.

Like the celebrated portrait of Michiel de Waal emptying his roemer by Hals (fig. 2), Verspronck portrays de Waal similarly irreverent with his jaunty hand and balanced hat. The artist employs a similar illusion and bravura technique in his, equally successful, Portrait of Eduard Wallis (fig. 3). De Waal may have been aware of the Wallis portraits of a decade earlier and asked for a similar reverse palm in his portrait, or the artist remembered the particular effect achieved and re-employed the device. 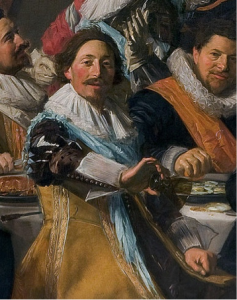 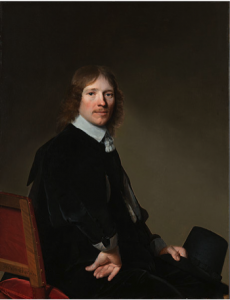 This portrait of the Bergemeester and the pendant depicting his wife his wife Aeltje van der Horst, to whom he was married in 16202 (fig. 4), demonstrates the level of commissions that Verspronck was executing at this time. With the De Waal family’s continuing involvement with the guilds (most notably the St. Jorisdoelen) insuring a family album by some of the greatest artists of the day (most remarkably, Michel de Waal by Hals, but also including de Grebber, and others), Johannes de Waal here continues the tradition of bold family portraiture, after his appearance, some 20 years prior, in the St. Jorisdoelen Guild portrait of de Grebber (fig. 1), whereas the captain of the company he is wearing a sash and is standing gesturing elegantly with the same hand that here reveals not only the casual, confident ease of the sitter, but the masterful brushwork of the next generation of Haarlem artist. 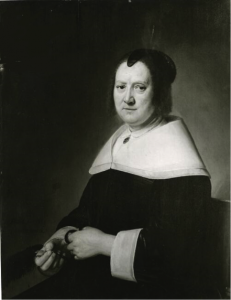