Portrait of the Infanta Isabella Clara Eugenia as a Nun, c.1635

Provenance:
With Agnew’s, Manchester, label on the reverse;
Private collection, Sweden, from whose estate bought by a Norwegian dealer in about 1980;
Private collection, Norway, until sold,
Sotheby’s, London, 10 July 2002, lot 5, where acquired by Johnny van Haeften (London), from whom purchased by the present owner.

The Infanta Isabella Clara Eugenia (1566-1633) was the favourite daughter of Philip II of Spain. In 1599 she married the Archduke Albert, youngest son of the Emperor Maximilian II, whom Philip had appointed Governor General of the Spanish Netherlands, and they ruled together until Albert’s death in 1621, whereupon she assumed sole governance. In 1622 she was received as a Tertiary in the Franciscan order, and died in 1633. All portraits of her after Albert’s death depict her as a nun in the habit of the Poor Clares, and all are based on the official portrait of her painted by Rubens in 1625 (fig. 1; see H. Vlieghe, Corpus Rubenianum Ludwig Burchard. Part XIX, Portraits, vol. II, Rubens Portraits of identified sitters in Antwerp, London/New York 1987, pp. 119-123, nos. 109-111, reproduced figs. 128-131). Dependant on Rubens’ prototype is Van Dyck’s portrait of the Infanta of 1627 (Kunsthistorisches Museum, Vienna, fig. 2), and the present portrait by Jacob Jordaens, which was certainly painted after her death in 1633, and probably towards the end of the 1630s. 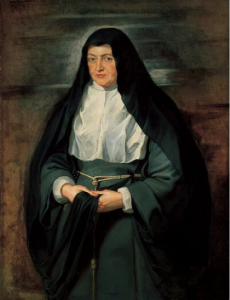 The coffered vault and gilded architectural detailing to the left of the Infanta and the red cloth behind her are reminiscent of the backgrounds of the portraits of Rogier le Witer and Catharina Behagel at the Rijksmuseum, Amsterdam, which Jordaens painted circa 1635. The range of buildings in the background are certainly fantastic creations of the artist, but are likely to be intended to represent one of the monasteries or abbeys founded by Albert and Isabella, or of which they were benefactors. During their reign, with their active encouragement, and stimulated by rapid economic growth in the Spanish Netherlands, and by the spiritual upsurge provoked by the Council of Trent, new monastic orders such as the Jesuits, Capuchins and Discalced Carmelites, and reorganised older ones such as the Augustinians, Dominicans, Benedictines, Cistercians and Premonstratensians became very active, leading to a surge of building of abbeys, monasteries and churches. The Archdukes commissioned a convent in Brussels for the Discalced Carmelite (or Theresian) nuns, erected between 1607 and 1611, and they were indirectly involved in the Antwerp church of the Augustinians built between 1615 and 1618. 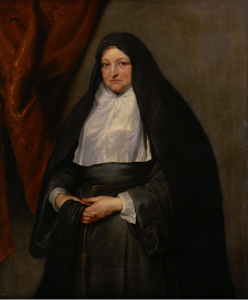 This is the only known portrait of the Infanta by Jordaens. Mentions of several drawn portraits of the Infanta by Jordaens in 18th-century sale catalogues are recorded, but none of these have come down to us. The coat-of-arms is a curious composite. It incorporates the double-headed eagle of the Holy Roman Empire, the citadel that is the impresa of the city of Antwerp, and the rampant lion of Brabant, surmounted by the coronet used by the Infanta, and encircled by the collar of the Order of the Golden Fleece. The plaster-gilt frame is certainly English, and probably dates from circa 1845-65.